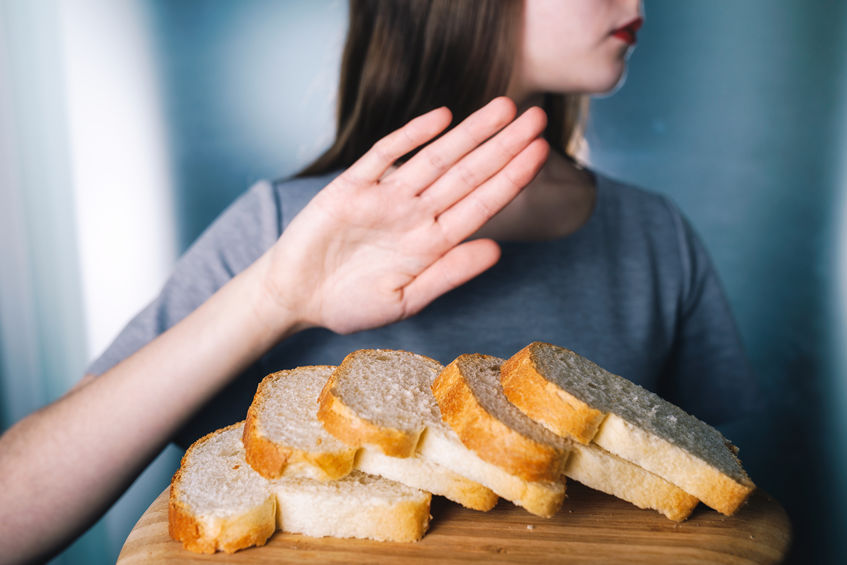 Found in grains, such as rye, barley, and wheat, gluten is simply a protein that doesn’t contain any essential nutrients. Bread, cereals, pasta, and pizza are the most popular sources of gluten. (1)

Eating too much gluten can result in chronic inflammation and multiple digestive issues – especially if you’re gluten-sensitive. People who are sensitive to gluten suffer from celiac disease.

When they consume foods that contain gluten, they experience an instant immune reaction, which is associated with stomach pain, diarrhea, and bloating.

That’s the main reason why gluten-free diets are so much in the rage right now. However, not everyone can or should go completely gluten-free – unless they have celiac disease.

Minimizing gluten in your diet in a healthy way is a perfect solution. Read on to find more information about gluten and how you can limit its consumption.

Why should you limit gluten consumption?

Gluten intolerance isn’t the only reason to minimize gluten in your diet or eliminate this protein from your eating plan for good. As mentioned above, people with celiac disease should avoid all gluten-rich foods. However, even if you don’t have celiac disease, you can still be sensitive to gluten.

According to a study, people have different reactions to gluten. (2) Some people can develop non-celiac gluten sensitivity that can result in numerous health issues.

That’s because wheat, which is the most popular source of gluten, contains other proteins such as amylase trypsin inhibitors and wheat germ agglutinin. These proteins can damage your health regardless of whether or not you’re sensitive to gluten.

Healthy people with no gluten intolerance might not notice any changes after eating bread, cereals, pasta, and pizza. This doesn’t necessarily mean that gluten doesn’t affect their well-being, though.

Gluten is one of the biggest gut irritants. It can stimulate an inflammatory immune response in the gastrointestinal tract by provoking immune cells, resulting in gut inflammation that’s the culprit in health issues like intestinal permeability.

Related:   How to Prevent and Reduce Bloating

Finally, if you’re looking to strengthen your immune system, lose weight, or simply improve your overall health, limiting your gluten consumption will help. Read on to learn how to do it.

What are the healthiest ways to eat less gluten?

Gluten is found in many common foods – not only in bread or pizza. In the beginning, you might feel a bit overwhelmed as you learn more and more about gluten-rich foods and meals. Don’t worry though. Over time, you might ditch gluten altogether as you feel all the benefits of not eating this protein.

What are the healthiest ways to eat less gluten?

One of the easiest and healthiest ways to lower gluten in your diet is to increase your veggie consumption, and this doesn’t mean you should start following a raw diet.

There are millions of veggie recipes to incorporate into your regular diet. Adding more of these recipes to your weekly meal plan will automatically reduce the amount of gluten-rich meals on your menu.

The next time you crave pasta, opt for zucchini noodles. If you’ve used to having sandwiches or burgers for lunch, order a bowl of salad instead at least three days a week. With a variety of vitamins and minerals, vegetables are also super low in calories, cholesterol, and sodium. Not only will you enhance your health by swapping gluten for veggies, but you’ll keep your weight at bay, too.

Related:   7 things that happen when we quit sugar

When you’re buying vegetables, make sure to choose organic ones if you can, as they are more nutrient-dense.

When going grocery shopping, you might have noticed many food products are labeled gluten or wheat free. However, free doesn’t always mean zero.

Moreover, there are alternative names for gluten, such as triticum spelta, secale cereal, hordeum vulgare, triticale, and triticum vulgare.

Another thing to bear in mind is that gluten-free products aren’t always healthy, so choose your gluten-free substitute products carefully.

We need to eat carbs for energy. Many foods that contain carbs, though, are also sources of gluten. Luckily, there are gluten-free carbs that provide energy without damaging your health.

If your meal plan contains too much pasta, diversify it with buckwheat, quinoa, beans, wild rice, brown rice, and oats. Carbs are also found in fruit and veggies, including blueberries, oranges, beetroot, sweet potatoes, and bananas.

Gluten-free versions of your favorite foods might taste a bit different, but remember that they could be better for your health. Look for gluten-free bread, crackers, waffles, pasta, marinades, and dressings.

The only important thing you should consider when buying gluten-free food is calories. Gluten-free products might contain more calories than their non-gluten free counterparts.

Related:   How to Avoid Gaining Weight During Quarantine

The other factor to consider is that some gluten-free substitutes are overly-processed. The great news is, you can make your own substitutes, unlike restaurants that typically purchase substitutes rather than make them.

Stay away from gluten-containing drinks

…or at least limit their consumption. Gluten is found in many drinks, especially in alcoholic beverages. Beer, for instance, contains gluten as this drink is produced by fermenting barley or wheat.

Wine is gluten-free. However, if you order a wine cooler, keep in mind that it may contain a gluten-containing grain called malt barley. Pre-made milkshakes and smoothies may also be sources of gluten, so be sure to read labels. Freshly brewed tea and coffee are gluten-free.

Munch on seeds and nuts

When you lower your gluten consumption, you might develop certain nutrient deficiencies, including fiber, calcium, and zinc deficiencies.

Unless you’re sensitive to gluten, there’s nothing dangerous about eating gluten. At the same time, there’s nothing healthy about it either. By minimizing the gluten in your diet, you’ll have more space for healthier foods. If you have any digestive issues, switching to a gluten-free diet can ease the symptoms and improve your overall well-being, too.

Can You Eat Too Much Avocado?
Probiotics and Prebiotics: What’s the Difference?