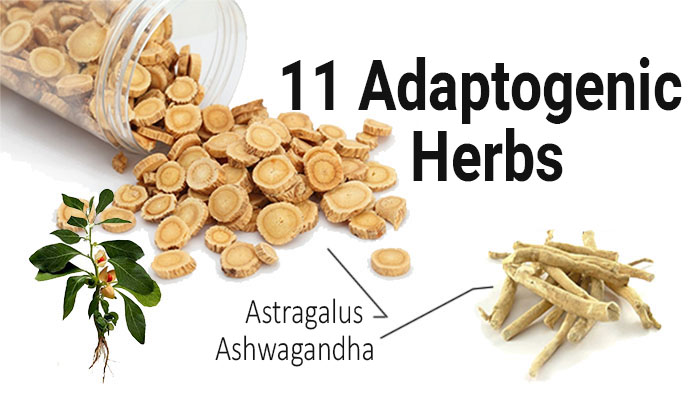 Adaptogens aren’t a new diet trend and it’s not even over-the-counter medicine.

Despite the complicated name, adaptogens are just powerful herbs that help to boost your adrenal system that controls the hormones of the body, which are linked to stress.

This unique group of herbs has an ability to alter their functions to fit the body’s specific needs.

Adaptogenic herbs have been studied for a long time.

Researchers have found that adaptogens have a few serious effects on the body that include the stimulation for the central nervous system, antidepressive effects, neuroprotective elements, and anti-fatigue properties.

Adaptogens are particularly good for people living a highly stressful lifestyle. The ability to lower the cortisol levels (that often lead to chronic stress) in the body is the key to eliminating the terrible damage of daily stress. Read on to find out the benefits of adaptogens and the safest sources of them.

What Are the Biggest Benefits of Adaptogens?

Not only do adaptogenic herbs help to fight stress and anxiety and relieve fatigue, but also offers you plethora of health benefits that include improving mental focus and physical endurance, preventing mood swings, strengthening the immune system, fighting inflammation, weight management, and raising the resistance to the chemical carcinogens that increase the cancer risk.

Moreover, adaptogens have been shown to help to control imbalanced hormones.

The study conducted by the Swedish Herbal Institute Research & Development, in Sweden, showed that adaptogens promote overall health – especially when you take it as a supplement with other medications for minor health issues and specific conditions. The study also claimed that adaptogenic herbs can help people with heart disease and various neurological disorders, including those that occur during the aging process.

What Are the Best Sources of Adaptogens?

There are many adaptogenic herbs and many of them are safe to use to treat certain health problems and conditions. Some of these adaptogens might be hard to find, so supplementation is the only way out. Below are some of the best adaptogens to consider, depending on where you live:

Also called Golden Root, Rhodiola is a powerful adaptogenic herb that has been the main focus of most researches on adaptogens. Rhodiola helps to fight the stress-related physical and mental fatigue and relieve panic attacks. Russian cosmonauts, military personnel, and athletes used Rhodiola to boost their health.

Rhodiola is an excellent source of salidroside, a phytochemical that helps to slow down the aging process and combat the most common symptoms of anxiety. That’s due to the Rhodiola’s ability to elevate the levels of stress-resistant proteins and suppress the production of cortisol.

Researchers have found that Rhodiola aids in restoring normal patterns of sleeping and eating after stress, eliminating oxidative stress, lowering physical and mental fatigue, and reducing radiation and heat stress, as well as limiting exposure to the toxic chemicals.

A number of anecdotal studies have also shown that Rhodiola can help to protect the liver and heart, boost memory, increase the use of oxygen, shed pounds, and even increase longevity.

Ashwagandha is a popular adaptogenic herb that contains a lot of good medicinal chemicals, such as steroidal lactones (withanolides), choline, alkaloids, amino acids, fatty acids, and diverse sugars. Herbalists use Ashwagandha to cure mild OCD, reduce high blood pressure, treat sleep disorders, reduce chronic fatigue, and relieve the symptoms of impotence caused by exhaustion or anxiety. Ashwagandha supports both immune and thyroid function. Due to its terrible smell and taste, Ashwagandha is usually taken in capsules.

With over 200 of studies and reviews done on Ashwagandha health benefits, it’s already clear that this adaptogenic herb helps to improve muscle strength and maximize muscle recovery, boost sexual potency for both male and female, have anti-malarial properties, reduce and ward off inflammation, lower cholesterol, keep blood sugar at bay, lower nerve damage and brain-cell degeneration, treat depression and anxiety without causing drowsiness, boost memory, learning, reaction and focus, reduce the side effects of stress, and strengthen the immune system.

Astragalus root has been used in Chinese medicine for centuries to improve the immune system and fight stress-related diseases. Astragalus root aids in increasing the number of anti-stress compounds in the body, helping it to repair, heal, and prevent the consequences of stress. It can also help to weaken the ability of the stress hormones, including cortisol, to stick to receptors.

Related:   How to Prevent and Reduce Bloating

Cordyceps have also been used for centuries to treat different diseases and conditions. These are a few kinds of mushrooms that possess potent antioxidants, which ward off mitochondria from the harmful stress-induced damage. Cordyceps incite the cells to generate the proteins that aid in resisting stress and preventing premature aging. Like other adaptogens, Cordyceps help to improve the immune system and calm the nervous system. They also have amphoteric and antidepressant effects on the body.

Being anti-inflammatory in nature, Cordyceps strengthen the immune system as well as reduce the damage caused by oxidative stress in the cells. They stimulate the production of the protective cells that lower the likelihood of mutations such as cancerous infections and cells.

Numerous studies have shown that Cordyceps can act like a natural cancer treatment, inhibiting the tumor growth – especially on the skin and in the lungs. Cordyceps are used in different countries to treat a cough, fatigue, asthenia after severe diseases, hyposexuality, renal failure, and renal dysfunction.

A study conducted by the School of Pharmaceutical Sciences, in the Peking University, in Beijing found that Cordyceps have potent anti-aging properties and they help to improve the activity of the natural antioxidants in the body.

Licorice root is an adaptogenic herb used for thousands of years to treat various health issues and conditions, including leaky gut. Rich in triterpenoids, stilbenoids, coumarins, and flavonoids, Licorice root has the powerful antibiotic, anti-inflammatory, and antioxidant properties.

Licorice root is best known for its great ability to relieve the pain, including PMS cramps and muscle pain. It may also relieve the pain related to eczema and other skin conditions. Moderate consumption of Licorice root can also help you treat menopause and all the symptoms related to it, soothe a sore throat, cope with a cough, boost the immunity, reduce the risk of influenza, HIV, and hepatitis C, handle adrenal fatigue, treat a leaky gut syndrome, relieve heartburn, and reduce stomach pain, indigestion, and nausea.

There are many studies done to prove the positive effect of Eleuthero on the human’s body. Although it has a bit more side effects than other adaptogens, Eleuthero can provide your body with some powerful health benefits. When taken in a recommended dose, Eleuthero helps to manage blood sugar level, boost the energy levels, improve stamina, strengthen the immune system, keep heart healthy, reduce triglycerides, and lower bad cholesterol levels.

Eleuthero is considered as a strong anti-viral herb, making it the perfect remedy for cold and flu. Patients have reported that Eleuthero helps to normalize heart rhythm and prevent internal blood clots, reducing the risk of stroke and cardiovascular disease. Eleuthero is beneficial to people with cancer as it aids in strengthening the immune system.

Typically used in Chinese medicine, Schisandra is one of the adaptogens that has little to no side effects. It’s prominent for its taste as it possesses all five flavors – salty, sweet, bitter, sour, and spicy. Schisandra boasts potent antioxidant properties that helps the body to stay balanced and overall promote excellent health. Additionally, Schisandra helps to protect the liver from many toxic agents and treat respiratory and digestive ailments. Even though the side effects of this adaptogen are rare, it’s still recommended to consult a doctor before using it to heal certain conditions.

Not technically a herb, Reishi is an adaptogen that is often called as a life tonic that helps to cure tons of health problems. Reishi is mostly used in Chinese medicine and boasts the powerful antiviral, antibacterial, and antioxidant properties. Reishi helps to treat chronic fatigue, heart diseases, liver and respiratory ailments, and can delay the cancer growth.

This adaptogen is also highly effective in preventing the internal blood clot, lowering cholesterol, and controlling blood sugar and blood pressure levels. Unlike Schisandra, Reishi has very serious side effects, so try to find a Chinese medicine practitioner to learn the way you should take this adaptogen to reap its benefits.

What Are the Most Dangerous Side Effects of Adaptogens?

Almost all adaptogens have side effects when taken incorrectly. Some of the most common side effects include flushed skin, racing heart and panic attacks. Some adaptogenic herbs have mild side effects while others have terrible ones, depending on how healthy or unhealthy you are.

For instance, Ginseng can cause stomach pain and insomnia, if you overdo it. Rhodiola can cause discomfort in the stomach and reduce the energy levels, especially if taken with caffeine. Too much of Ashwagandha can lead to nausea, vomiting, diarrhea, or other digestive issues. Reishi isn’t recommended for pregnant and breastfeeding women and overuse of it can interfere with blood clotting and cause skin irritation, dizziness and diarrhea, and stomach upset. Eleuthero’s side effects are drowsiness, mood swings, headache, panic attacks, and sleep disorders, including chronic insomnia.

If taken in a large amount, without enough hydration or on an empty stomach, adaptogenic supplements can cause discomfort and pains because of its natural components.

Although adaptogenic herbs rarely cause serious side effects, it’s best to consult your doctor before taking any to be sure you won’t harm your health. If you suffer from any chronic disease and serious conditions like tuberculosis, cancer, hepatitis, or cardiovascular diseases, it’s vital to be extra careful with natural remedies.

Lots of people with minor and serious health issues and even deadly diseases, including cancer and diabetes, have reported the positive results from taking adaptogens. Adaptogenic herbs help to protect, balance, and restore the body’s functions, but you should be careful when using them to treat certain health conditions.

Is It Healthy to Eat Fish or Chicken Skin?

How to Freeze Fresh Foods to Prevent Waste

Water with Meals? Is It Good or Bad?