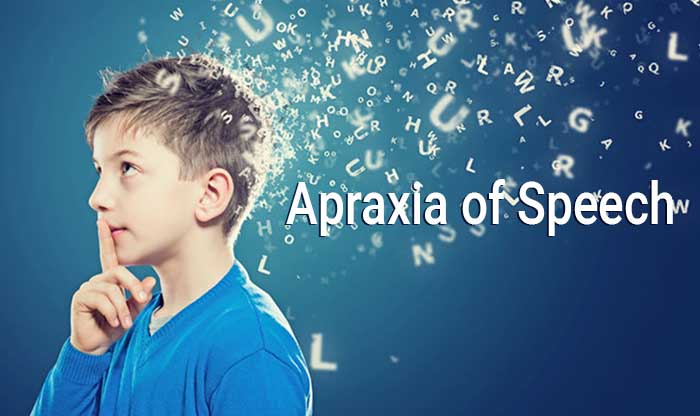 This neurological disorder negatively impacts the brain pathways, which are responsible for planning the movement sequence involved in the speech production.

Even though people with this disorder know what they want to say, the brain fails to plan and sequence the needed speech sound movements correctly. While children are more likely to develop apraxia of speech, any person can suffer from it too. Today, we’re going to discuss the types, causes, symptoms, and treatment of apraxia of speech.

What are the forms of apraxia of speech?

Developmental apraxia is the most common type that’s present from birth. It’s often confused with developmental delays in speech, but childhood apraxia of speech (CAS) is something different.

Children with CAS know what they want to say, but they have difficulty uttering the words. They may not be able to move their tongue or lips to the right place to speak, albeit their muscles might not be weak. Often, they might not be able to say anything at all.

The genetic factors play a crucial role here, as one study showed that most kids with AOS have family members who had or have some learning disabilities or communication disorders. The main signs and symptoms of CAS are:

There are also other issues children with CAS may face:

Acquired apraxia of speech can affect anyone regardless of age, albeit it’s more likely to happen in adults. The major cause is a damage of the certain areas of the brain, which are responsible for speaking process.

The condition involves the impairment or loss of existing speech abilities. Acquired apraxia of speech often occurs as a result of a head injury, stroke, tumors, and other conditions that affect the brain function. This type of apraxia of speech may happen together with any other illnesses and diseases caused by a damage of the nervous system. Dysarthria is one of them. The language disorder, aphasia can also occur along with apraxia of speech.

What’s the difference between aphasia and apraxia of speech?

Since both apraxia of speech and aphasia are communication disorders they’re often confused, but there’s a big difference between these conditions. When these two conditions happen at the same time, the situation can get worse and the symptoms of each condition can be hard to recognize.

People with aphasia and apraxia of speech might both have trouble expressing their thoughts and feelings with words. But still, there are some critical differences between these conditions.

Aphasia occurs when a person has difficulty to use or understand words, making it hard for them to write, read, or speak. On the other hand, a person with apraxia of speech doesn’t have an issue with language comprehension. But they do have trouble performing or/and initiating the movements required for speech, though there’s no weakness in those muscles.

What are the leading causes of apraxia of speech?

In most cases, the condition is caused by impairment to certain areas of the brain that regulate the speech and muscle movement. But, scientists are still trying to identify a particular area of the brain that causes apraxia of speech.

Many patients with a damage of Broca’s area, areas of the insula, and left subcortical structures, have been diagnosed with apraxia of speech. People with traumas and tumors are more likely to suffer from the condition as well.

A lot of health care providers claim that stroke is becoming the major cause of apraxia. They can even create a new form of apraxia of speech called stroke-associated AOS. More studies are needed to learn more details about this form.

Traumatic brain injury, progressive neurological disorders, and dementia can also cause apraxia of speech in adults.

What are the main symptoms of apraxia of speech?

Patients with any form of apraxia of speech have many different speech symptoms, including:

Children with apraxia of speech may show many other symptoms, so it’s hard to set a diagnosis without seeing a speech-language pathologist.

Although you can turn to any health care provider, only a speech-language pathologist can help you to diagnose the correct type of apraxia of speech and treat it.

Since there’s no particular test or symptom to diagnose the condition, a speech-language pathologist will check out the presence of a few other groups of symptoms mentioned above.

The pathologist will also try to figure out any other conditions that are similar to apraxia of speech, such as language production issues or muscle weakness. This helps to set the right diagnosis.

Patients with both childhood and acquired apraxia of speech are generally asked to perform a number of speech tasks like repeating one or several particular words a few times until they pronounce them correctly or repeating the words, increasing their length (for instance, charm, charming, charmingly).

Patients with acquired apraxia of speech are often examined to show the ability of conversing, writing, reading, and performing non-speech movements.

Children with speech problems can be observed for a certain period of time before a speech-language pathologist diagnoses them with childhood AOS. Sometimes it takes up to 2 years when kids are supposed start speaking more distinctly.

The biggest misbelief about apraxia of speech is that this condition will vanish itself or toddlers will outgrow the issue on their own.

Apraxia of speech is a serious condition and it requires a prolonged treatment – especially when it comes to kids. In rare cases, patients with acquired apraxia of speech recover all or some of their speech abilities without turning to a speech-language pathologist.

It’s known as spontaneous recovery but it doesn’t work for all. Only few adults can manage to spontaneously recover their speech abilities at home.

Children with apraxia of speech and adults with acquired apraxia of speech who fail to spontaneously recover their speech abilities should undergo a professional speech-language therapy to recover from the condition.

Speech-language pathologists apply various methods to treat apraxia of speech, but unfortunately, no method has scientifically been proven to fully treat the condition. Each patient needs an individual therapy.

The therapy may take months and years to see the results and sometimes an additional therapy is required to treat other language or speech issues that may happen along with apraxia of speech.

Depending on the severity of the condition, both kids and adults with apraxia of speech need intensive and frequent therapy sessions. If you can afford, you can undergo one-on-one speech and language therapy sessions.

The repetitive exercises are the critical part of each session. Kids with a severe type of apraxia of speech may need the annual intensive speech-language therapies.

Kids are allowed to go to schools and adults can live an ordinary life, however in order to obtain restore speech abilities, regular repetitive exercises are a must.

In more severe cases, children and adults with apraxia of speech have to find some other ways to communicate with others without words. They often have to learn both informal and formal sign languages.

Related:   6 Ways to get vitamin D

Those who have trouble with learning them have to carry a notebook with written words or pictures that they use when talking to other people.

Patients with apraxia of speech who don’t have issues with reading or typing use the electronic communication devices like smartphones, tablets, and laptops to produce or write speech.

Although such assistive communication approaches can help kids and adult with apraxia and teach them to better understand others, it’s still important to undergo professional therapy. It will stimulate the areas of the brain, which are responsible for literacy and language.

Some people with apraxia of speech can recover faster than others, which is why a strong support from family, relatives, and friends are so important.

Can apraxia of speech be prevented?

Childhood apraxia of speech can’t be prevented but it must be diagnosed as early as possible. Early treatment can ward off any complications and overall improve the communication skills of a child. It’s also important to monitor the child’s immune system; it should be strong enough to reduce the impact of the condition.

On the other hand, apraxia of speech in adults can be prevented by reducing the risk of the stroke and any head injuries. Regular exercise, healthy eating, and getting enough sleep are three habits that help to significantly lower the stroke risk.

What are the complications of apraxia of speech?

The complications of apraxia of speech are:

Just like any other condition, apraxia of speech isn’t easy to deal with, without a special treatment.

Don’t wait until your child will outgrow it, believing that they will start speaking themselves, be sure to see a speech-language pathologist as soon as possible.

If apraxia of speech occurs due to other health issues, an efficient treatment is essential too.

11 Health Tips That Will Gift You 10 Extra Years of Life
Vitiligo: Types, Causes, Symptoms, and Treatment