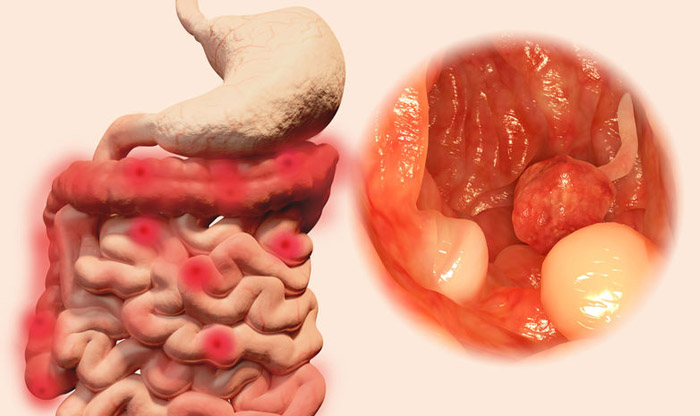 Colon cancer is the third leading cause of cancer-related deaths in the United States. (1)

One of the major concerns for colon cancer is bowel polyps since among the critical factors credited with its decline is prevention through screening and the removal of precancerous polyps. Bowel polyps are very common, and they affect approximately 1 in 4 people. (2)

It is then essential to understand what bowel polyps are, and what to do about them.

What are bowel polyps?

Bowel polyps, also known as colon polyps, are small growths that are found on the inner lining of the colon (large intestines) or rectum. They range in size, from several millimeters up to 10cm. (3) Moreover, some people may have just a single polyp while others have several.

In appearance, some are a simply a raised bump, others look like a wart or mushroom while others are a cluster of tiny bumps, as explained below. (4)

Bowel polyps form when there is an abnormal proliferation of the cells lining the colon. This change can be brought about by a mutation in genes, that causes overgrowth of cells that then form a polyp.

In normal circumstances, immature cells on the lining of the colon and other body parts are signaled to multiply, mature then die in a consistent and timely manner.

If there is genetic mutation such as in bowel polyps, the cells divide at a faster rate, do not mature and do not die as programmed. What results is an accumulation of immature, abnormal cells that form protrusions from the lining of the large intestines. (5)

There are different types of bowel polyps each with unique characteristics in terms of size, location, and shape. They are grouped into two main categories, hyperplastic and adenomatous (adenoma) polyps.

Nearly 90% of bowel polyps are hyperplastic polyps and are usually harmless. (6) Typically they range from 1 to 5mm in dimension and are most commonly found in the left colon especially the rectum. (7)

Adenomatous polyps appear different from hyperplastic polyps based on how they grow. They have four main growth patterns, including tubular, villous, sessile and serrated.

Not all adenomatous polyps are harmful, but some turn to colon cancer. In general, the larger the adenoma, the higher the chances of turning to cancer. Also, if the polyps are more than three polyps, the malignant potential increases. (8)

How are bowel polyps related to colon cancer?

In most cases, polyps are harmless non-cancerous growths. However, over time adenoma polyps carry a small risk (less than 1%) of becoming malignant.

Actually, most bowel cancer cases develop from polyps, but it does not always mean that if someone has an adenomatous polyp, they will get cancer. So, what exactly happens for polyps to switch from benign to malignant?

It takes many years (approximately ten years) for polyps to develop into cancer and can be fatal when found in late stages. (9) Initially, when the cells are just a polyp, they are limited to the lining of the colon.

Related:   All You Need to Know about Hepatitis and Hepatitis C

When the genetic mutation occurs, the cells develop the ability to invade the deeper layers up to the wall of the colon. They can even break away from the colon and join the lymph system where they metastasize to other body parts. However, that happens when the cancer is not detected and treated early.

That is why diagnosis and treatment of bowel polyps are of significant concern. (10) After the removal of the polyps, the affected person will need ongoing screening to detect any additional development of polyps (polyps do recur) or signs of bowel cancer.

Who is at a higher risk of having bowel polyps?

Anyone can get bowel polyps, but certain factors make one more likely to have them. They are more common in men than women and are most common in those above 60 years of age. Other predisposing factors include: (11)

Signs and symptoms of bowel polyps

Most people do not experience any signs of bowel polyps, so they are often picked up during routine examinations and screening for bowel cancer. However, larger polyps may cause (12):

Most bowel polyps are diagnosed through a colonoscopy, a procedure that detects changes in all parts of the colon and rectum. The doctor uses a colonoscope, a tube with a camera and light attached to it. The tiny camera sends images to an external monitor, allowing the doctor to visualize the colon and get tissue samples for examination.

To prepare for a colonoscopy, the colon should be emptied as any residue may obscure the view during the exam. (13) Some ways to empty the bowel include:

If polyps are found, the doctor can remove them during colonoscopy.

CT colonography is less invasive and uses low dose radiation to view the interior sections of the colon. Just like an X-ray, images are generated for the doctor to review. The bowel cleansing regimen is the same as that of colonoscopy. The drawback with CT colonography is that if a polyp is found, a colonoscopy has to be done for removal.

Related:   How to Prevent Hair Loss: 13 Tips to Help Save Your Hair

Magnetic Resonance Imaging (MRI) also displays images of the colon and rectum but is better than CT colonography because it does not use any radiation. A common problem with MRI and CT colonography is they can both miss polyps that are less than one centimeter in size.

Sigmoidoscopy just like colonoscopy uses a thin flexible tube with a camera to visualize the lining of the colon. The difference is that sigmoidoscopy covers only the lower part of the colon (sigmoid) and rectum.

Barium enema, a traditional method of diagnosing polyps, involves filling the colon with barium, then multiple X-rays are taken at different angles.

Fecal Occult Blood Test is important to check for blood in stool and assess for DNA in the stool. If the stool test is positive, a colonoscopy is required.

Bowel polyps are removed, regardless of whether they are causing symptoms or not. This helps to lower the risk of colon cancer. (14)

The most common treatment is the removal of the polyps (polypectomy) during colonoscopy. The doctor uses a wire loop to either pull tight and cut off the polyp or to cauterize (burn off). Both of these procedures are painless and can be done on an outpatient basis.

When necessary, the doctor may use a laparoscope that is inserted through the abdominal wall through small abdominal incisions. The instrument has a camera that allows the health care provider to visualize the polyps then resect them.

Surgery is rare, but it may be recommended when the polyps are too large, too many or cannot be reached during colonoscopy. Most of the operations done are laparotomy, where the surgeon makes a single large abdominal incision to remove the polyps.

Very rarely, the large intestines and rectum may be removed. It is indicated when the polyps are numerous. After the resection, a pouch is made at the end of the ileum then attached to the anus, for removal of waste products.

After the removal of the polyp(s), the tissue sample is then sent to the lab for pathologic examination. The lab investigations can tell whether the whole polyp was removed, whether there is any risk of it regrowing or if there is any cancerous change. The transition from benign to malignant can be seen under a microscope, making it easy to intervene before metastasis occurs.

It is important to note that the sure way for treating polyps is by removal. There is no scientifically proven conventional method that shrinks or eliminates them. The home remedies below are only meant to be applied together with the endoscopic, colonoscopic or surgical removal.

Include plenty of antioxidants, essential nutrients, and high-fiber food sources as they are known to be beneficial to the gut. Also, increase consumption of fresh herbs and spices like ginger, garlic, basil, green tea, and fresh green juices. (15)

Omega-rich sources including salmon, mackerel, sardines, and herring should also be considered as they are not just anti-inflammatory but also protect the cardiovascular system.

Related article: What Is Anti-Inflammatory Diet and How to Do It

According to the World Journal of Gastrointestinal Oncology (16), sufficient levels of vitamin D regulate the balance of the intestinal epithelium by modulating the carcinogenic signaling pathway and inhibiting tumor-promoting inflammation. It thereby reduces polyp recurrence and lowers colon cancer risk. The best way to meet the nutritional demands of Vitamin D is not by taking supplements but through dietary sources and exposure to the sun.

Inflammation in the bowel and especially Inflammatory Bowel Disease (IBS), increases the chances of polyp growth. Treat the disease alongside a diet that bulks up the gut, to slow the movement of food through the digestive system. (17) Other chronic inflammatory disorders and autoimmune conditions should be treated as they also contribute significantly to gastrointestinal health.

Can they be prevented?

The best prevention method for colon polyps and bowel polyps is to adopt a healthy lifestyle and get screened regularly. Some of the changes to make are:

Lose weight if overweight or obese. Go for scientific-based methods of losing weight (healthy balanced diet, portion control and exercise). Crash programmes and diets encourage rapid weight loss which is not sustainable and predisposes the body to other intestinal problems.

Maintain regular exercise for 30 to 45 minutes 3 to 4 times every week.

There is scientific evidence that taking non-steroidal anti-inflammatory drugs (NSAIDs) a group of drugs that consists of drugs like ibuprofen, aspirin, and celecoxib lower the chances of development of polyps by 30 to 50%. (19) However, there are concerns about high dosage and prolonged duration of intake, which increase the risk of gastrointestinal bleeding and cardiovascular diseases. The risks therefore surpass the benefit of prevention of polyps.

If a polyp was removed, the best way to prevent further complications is to go for regular colonoscopy checkups every 3 to 5 years to catch any additional or new polyps and evaluate for bowel cancer. The interval may be less than three years, especially if during colonoscopy, the rectum had residue from retained fluid and feces.