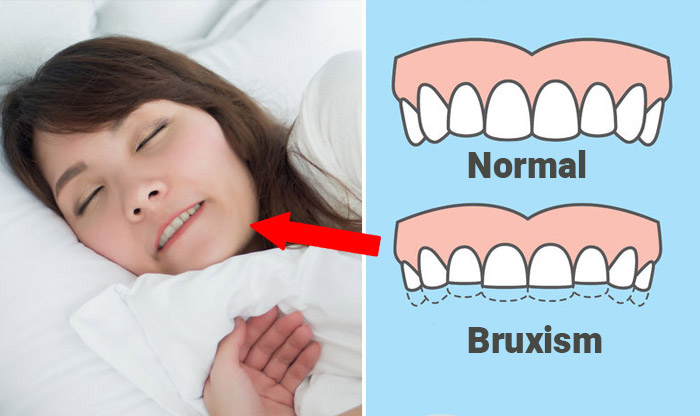 Upon first hearing what it is, some may think of it as a minor anomaly; something you’d see on My Strange Addiction. In the face of things like heart disease, cancer, and diabetes, it might not seem as bad.

However, Bruxism is a serious disease, and many of the millions of people who suffer from it, often see it as nothing more than a bad habit and leave it untreated. Bruxism needs to be nipped in the bud as soon as possible, to prevent and minimize any potential damage that can come from it.

But what is Bruxism exactly? What causes it? What are the warning signs, and can permanent damage be avoided if it is caught and treated in a timely manner? That’s what we will be discussing today.

Bruxism, is one of two things (Although you could end up doing both.): Excessive jaw clenching, and or the excessive grinding of one’s teeth. It is classified as a parafunctional habit, which is any abnormal behavior or functioning of the oral structures and associated muscles.

Bruxism is split into two categories: Nocturnal Bruxism, which occurs during sleep and is the third most common parasomnia, and awake Bruxism, which happens when you are awake.

Women are more prone to suffering from awake Bruxism than men are. Children grind their teeth more than adults, with an estimated 15% to 33% of children guilty of doing this and about 8% of adults. Most children tend to grow out of it, while adults are the ones who tend to suffer long-term from it.

What are the symptoms of Bruxism?

One of the biggest issues of Bruxism, is that it can be hard for you to recognize the signs of it on your own.

In the case of awake Bruxism, the grinding of teeth and or clenching of the jaw are often unconscious actions; ones that you do not know you are taking. And in the case of sleep Bruxism, you obviously are not aware of what your body is doing while you are sleeping.

If you are experiencing any of the symptoms, then you may be suffering from Bruxism:

What are the causes of Bruxism?

Similar to the symptoms of Bruxism, the causes of it can be tricky to pinpoint, and will vary from person to person.

Extensive studying has been done, and it has been determined that several main factors can, induce Bruxism, and those are:

Although studies linking emotional disorders to bruxism are not fully conclusive, the data does still prove that the emotional state of individuals could play a factor in their getting Bruxism.

Anxiety and stress seem to be the biggest factors out of any to cause Bruxism, and that makes it all the more difficult to eliminate Bruxism. Your dentist could provide you with a mouth guard or recommend exercises to keep yourself from grinding your teeth, but curing your stress or anxiety disorder wouldn’t be his or her forte.

Similarly, studies have also been done to determine if mental disorders play a role in the development of bruxism. And like emotional disorder studies, results are not completely conclusive, but poor mental health, can play a role, and Bruxism isn’t uncommon amongst those with depression.

Emotional and mental issues are not the only possible reasons people develop Bruxism. It could also be a result of some dental issues, such as an under/overbite, and or teeth misalignment. If that is the case, then it should be a lot easier to fix than if your Bruxism stems from emotional and or mental health issues.

How it works, is when you are asleep and momentarily stop breathing, your brain sends a signal to get your jaw moving forward. This forward motion, opens up your airways enough for you to breath.

There are other possible factors that could lead to Bruxism, such as substance abuse, smoking and personality type. Particularly people with competitive personalities, as they tend to get more frustrated than people who are laid-back.

Due to the complexities in determining what exactly causes Bruxism, it is crucial getting to a medical professional right away should you notice any of the warning signs.

The direct cause of your Bruxism may be something like stress, depression, anxiety or sleep apnea, your dentist will be the first person that you should see, if you think you have Bruxism.

Although they cannot determine the reason behind your Bruxism, they can tell you if you have it or not. All of the damage that comes from Bruxism, will be done to your teeth, jaw and general facial area.

Low to moderate teeth grinding may not need any treatment to fix. However, if your level of teeth grinding is extreme, then you will need dental and or orthodontic assistance to rectify the damage.

Teeth grinding will whittle down your teeth, until they become flat and short. They may become cracked, fractured and or loosened. The enamel will weaken and your nerves may become exposed, which can make your teeth extremely sensitive.

Food and beverages of extreme temperatures of hot or cold may cause you intense pain at the touch. You are also prone to being in a lot of pain in and around the jaw area.

Depending on the state of the damage, it may be fixable, but oftentimes, the damage is permanent. You may end up needing implants, bridges or partial dentures. Bruxism is not only very bad for your oral health, but it is also quite bad for your wallet, as these restoration procedures are very costly.

Treatment of Bruxism: What can be done?

Not to sound like a broken record, but since Bruxism is a two-step treatment process, treating the reason behind your Bruxism, and treating Bruxism itself, this disease is not an easy fix.

For the 1 step in treatment, that will vary depending on each individual case, but for treating Bruxism, most treatment is aimed at preventing further damage, and curbing the habit of teeth grinding.

Upon visiting your dentist and their diagnosing you, their first course action, will likely be giving you a dental mouth guard. This will not cure your Bruxism, but it will keep your from grinding your teeth; particularly during sleep.

Keep in mind, that some dental professionals,have criticized the use of dental mouth guards, citing it as being akin to putting a band-aid on a still bleeding wound.

Mouth guard usage while sleeping, may also be a potential danger to you. If you have nocturnal Bruxism and sleep apnea, a mouth guard may make it even harder for you to breath while you are sleeping.

Dentists are also at liberty to prescribe pain medication to you. If your teeth, mouth and or jaw are giving you a lot of pain, a prescription from your dentist should be able to alleviate some of the immediate pain.

Dentists may also recommend some Bruxism exercises, designed to help your curb your compulsive habits of teeth grinding and jaw clenching.

These exercises, mostly consist of relaxing your jaw. If these don’t pan out, then you may also be prescribed some muscle relaxants.

There are also a few things that you will want to avoid doing, if you want to curb your habits. Avoid any food items that contain caffeine, as well as alcohol.

You will also want to avoid chewing gum, as going through those motions may make you more susceptible to getting into the habit of clenching your jaw and grinding your teeth again.

Another possible avenue of treatment you can consider, is biofeedback therapy.

In biofeedback therapy, electric sensors, are attached to areas of your body (Depending on what part of the body you wish to have more conscious control over) and you are sent feedback via these devices which tell you what’s going on, and can help you gain more conscious control of your body. And since teeth grinding is often something that is unconsciously done, this may prove very effective in curbing that nasty habit.

Biofeedback therapy is also known to be relaxing for some, and a stress reliever.

Which is a great thing, since the most important form of treatment, depends on you.

Treat the disease, not just the symptoms

As stated above, grinding your teeth may very well just be a dental thing; a misalignment that your dentist can fix, and then that’s that. However, for the vast majority of people, it’s not that simple.

Once you know that you have Bruxism, it is very important, that you be honest with yourself about your mental and emotional states.

Although an absolute, universal conclusion has still not been reached on this subject, things like stress, anxiety and depression have been proven to be notable contributing factors to cases of Bruxism.

According to the Bruxism Association, stress is the main reason behind Bruxism in 70% of cases. Your dentist can give you a mouth guard, but your dentist cannot cure your depression or relieve your stress.

If stress is the reason behind your Bruxism, consider biofeedback therapy. Yoga and meditation, are also excellent ways to relieve stress. Find a class near you, and do your best to let go of what’s bothering you.

Stress-induced Bruxism has a little more wiggle room than the next, as you have more control over it. You may not even need to do yoga or meditation if those aren’t your things; just do what you enjoy and what relaxes you. If that’s fishing, or painting, whatever strikes your fancy will get the job done. The important thing, is for you to relax and to stay relaxed.

If your job is the main cause of your stress, then it may be time to start looking for another pasture. Easier said than done I am sure, but no job is worth your health. If it is a friend and or a family member causing drama, consider cutting ties with them temporarily or permanently. Again, nothing is worth your health.

If anxiety or depression are the reasons behind your Bruxism, than this will be a lot harder to solve.

Consider seeing a psychiatrist. Remember, depression and anxiety disorders are diseases, and you cannot take them on alone. Without receiving professional help, the realization that you are suffering from Bruxism, may worse your mental condition.

Bruxism is a two-part problem. It can’t be solved by doing one part of the equation and skipping out on the other. Know the signs, contact the appropropriate medical professional, and nip this issue in the bud before it becomes a (more) serious issue.