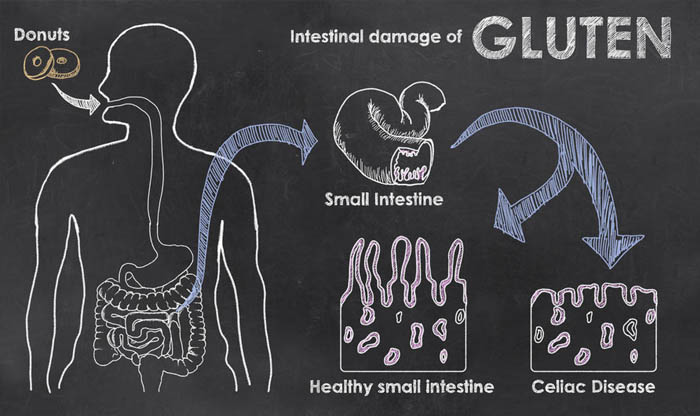 Celiac disease is a serious autoimmune disorder caused by gluten consumption. Albeit this digestive condition rarely leads to lethal outcome, it’s important to recognize and treat it. Read on to learn more about causes, symptoms, diagnosis, treatment, and prevention of celiac disease.

This condition happens after eating foods high in gluten. Found in a variety of foods, beauty products, supplements, and medicines, gluten is actually a protein that the body might have difficulty to digest and process. The most popular sources of gluten are wheat, rye, barley, oats, and triticale.

People with celiac disease have a gluten-induced immune response that stimulates the formation of toxins that damage the intestinal villi. Located along the small intestine’s wall, the intestinal villi are little, finger-like projections that play an important role in nutrient absorption.

When the intestinal villi are damaged, the ability of the body to absorb food nutrients is reduced. If ignored, it can trigger malnutrition, permanent intestinal damage, and other health conditions.

The National Institute of Diabetes and Digestive and Kidney Diseases ✅ states that one in 141 Americans suffers from celiac disease. The complete elimination of gluten is the first important action to take to relieve the symptoms.

The most common sources of gluten are:

Gluten can also be found in many other packaged foods and it might not be mentioned in the ingredient list, so it’s important to test new food by eating small portions. This way, you’ll reduce the severity of celiac disease symptoms.

What are the causes of celiac disease?

A large number of researches have been done to find out the root cause of celiac disease, but still, there are no scientifically proven causes of it. Researchers suggest that this condition might be triggered by three factors:

Nowadays, most food items we consume contain gluten. If you have celiac disease, eating gluten-containing foods spurs the immunity to attack and damage the small intestine, and thus you start experiencing the symptoms of celiac disease. By eating too much gluten, you can’t develop a disease. There are environment and genes factors to consider and are kept studying these days.

The University of Chicago Medical Center ✅ revealed that there’s a 1 in 22 chance of developing celiac disease if one of your parents or siblings suffered or suffers from this condition.

Related:   Treatments for a Herniated Disc

Individuals with genetic disorders or autoimmune diseases are at risk, too. Certain illnesses can also be associated with celiac disease.

In very rare cases, a surgery, viral infection, stress, or an emotional trauma can be a cause of celiac disease. The condition can also develop after pregnancy and breastfeeding period. Caucasians are more prone to celiac disease than other nationalities.

What are the symptoms of celiac disease?

Many people believe that celiac disease is just a form of food allergy. In reality, if you have an allergy to wheat, for instance, you might have difficulty breathing and have watery or itching eyes.

Wheat contains gluten, but it has nothing to do with allergy. If you suffer from celiac disease and you eat wheat, you’re more likely to experience intestinal issues, such as constipation, gas, or diarrhea.

In most cases, kids and adults have different symptoms of celiac disease. Kids start feeling irritable, tired, and anxious. Moreover, they might show the following symptoms:

Adults can also experience many other symptoms, as celiac disease affects various areas of the body besides the digestive system. The most common symptoms include:

There are certain factors that can impact on the development of celiac disease, such as:

How is celiac disease diagnosed?

Those with dermatitis herpetiformis need to undergo a skin biopsy to diagnose celiac disease. In rare cases, when blood tests and a skin biopsy don’t help to set a diagnosis, an upper endoscopy might be required.

The procedure involves an endoscope – a thin tube with a small camera – being inserted through the mouth into the small intestines. This allows a doctor to see any damages or changes in the villi. An intestinal biopsy might also be done during the procedure for a more detailed diagnosis.

How is celiac disease treated?

As soon as you’re diagnosed with celiac disease, the first thing you must do it to switch to a gluten-free diet. Not only will you have to avoid cakes, bread, baked goods, cereals, pastas, and beer, but you’ll also have to avoid taking medications or using toothpaste that contains gluten. The gluten-free diet will speed up the healing process of the intestinal villi and improve the absorption of nutrients.

The symptoms of the celiac disease usually disappear within several days after switching to a gluten-free diet. It’s important to discuss your diet changes with your doctor, especially if you’re going to do tests.

There are no medications to cure celiac disease. However, certain medications can be used to relieve the symptoms of the disease, such as vomiting, bloating, diarrhea, or constipation. People with illnesses or conditions associated with celiac disease might need a specific treatment.

How to prevent celiac disease

Unless celiac disease runs in your family, it’s almost impossible to prevent this condition. However, if you stop the symptoms early, you can avoid the consequences of celiac disease.

What are the complications from celiac disease?

Since celiac disease is difficult to spot and diagnose, many patients have been suffering from it for many years. They keep eating gluten-containing foods, and this results in the prolonged damage to the small intestine. When left untreated, celiac disease begins to negatively impact other parts of the body.

Depending on how long you’ve been suffering from this condition, the recovery time can be increased and more treatment methods might be used. The most common complications that occur when celiac disease is ignored are:

These are just a few complications that can happen due to uncontrolled celiac disease. A lot of patients diagnosed with this disease also have an increased risk of developing pancreas, gall bladder, and liver conditions. Some researchers link anxiety and depression with celiac disease. However, more research is required to prove this fact.

What are the gluten-free foods people with celiac disease can eat?

When switching to a gluten-free diet, you may notice that you have to remove most of the food items people usually eat. There are some perks of this diet, though. Since it includes healthy food, a gluten-free diet helps to boost overall health. So what are you allowed to eat on this diet? Here are a few foods to incorporate into your daily meal plan:

Before you place any food item in your shopping cart, be sure you read the label carefully. Some labels don’t say “gluten free”, so look for six most dangerous ingredients like oats, rye, barley, wheat, brewer’s yeast, and malt. People with celiac disease shouldn’t consume them anyway.

If you spot some or all of the symptoms of celiac disease – especially in your child – make sure you see your doctor as soon as possible. Don’t try to set a diagnosis yourself and treating the condition without taking blood tests first. Even though there are no medications for treating celiac disease, it’s still important to set the correct diagnosis in order to avoid the complications mentioned above.

Why You Snore and How to Stop It
Deep Sleep: Definition, Benefits and How to Get It