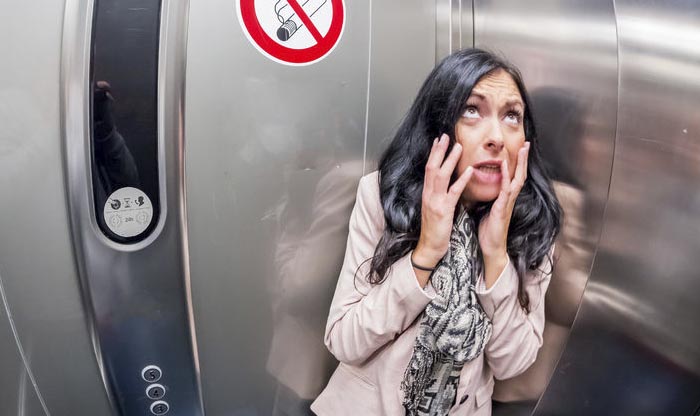 One of the most common phobias out there, claustrophobia is a type of anxiety disorder triggered by an intense and irrational fear of crowded or tight spaces.

Claustrophobia is often triggered by the things like being stuck in a narrow and crowded elevator, being locked in a small room without windows, wearing tight-necked clothing, or being stuck underground.

People suffering from claustrophobia might have a severe panic attack in the closed spaces, albeit this phobia isn’t considered as a panic disorder.

While some people can cope with claustrophobia on their own, others require a special therapy to handle and ease their symptoms. Read on to find out the symptoms, causes, diagnosis, and treatment of claustrophobia.

What are the major symptoms of claustrophobia?

The symptoms of claustrophobia highly depend on a trigger of this anxiety disorder. There are plenty of triggers, including:

The major symptoms include:

All of these symptoms can occur at the same time and might be so severe that you have to call a doctor. If you’re suffering from claustrophobia, you might also experience:

Sometimes, the symptoms of claustrophobia aren’t necessarily caused by other situations. People with claustrophobia have a tendency to define a confined or small space differently from non-claustrophobic people.

That’s because each person has their own sense of a “near” or personal space.

A study done by a group of American and British researchers showed that individuals with the bigger “near” spaces surrounding their bodies tend to experience the symptoms of claustrophobia once that circle is changed.

Let’s say, your personal space is 5 feet, and if someone stands 3 feet away from you, you’re more likely to start feeling claustrophobic.

What are the major causes of claustrophobia?

Although some of the causes were mentioned above, scientists and doctors are still trying to figure the major triggers of this condition.

They believe that certain environmental factors might play an important role in the development of claustrophobia.

A few studies have found that claustrophobia is more likely to develop during childhood and teenage years.

The experiences and situations that can have this effect in children may include:

While there’s no scientific proof that children who grow up with a claustrophobic parent or a family member develop claustrophobia, yet the risk factor is high.

When a child sees that someone in their family is afraid of a small space, they’re more likely to start developing anxiety and fear when being in similar situations as an adult.

There are also possible physical or genetic factors that might explain claustrophobia. Having a smaller amygdala is one of them. Amygdala is the part of the brain that regulates the way the body processes the fear.

There are also genetic factors to consider, but more research is needed to explain this cause.

If you think you might be suffering from claustrophobia, it’s recommended to visit a psychiatrist or psychologist. Sometimes people confuse claustrophobia with random panic attacks.

An early diagnosis of claustrophobia helps to manage its symptoms more effectively. The doctor might ask you to describe your symptoms and possible causes. This will help them establish how intense or severe your symptoms are and figure out any other possible type of anxiety disorder.

Related:   Treatments for a Herniated Disc

Your doctor may use a claustrophobia scale in order to find out the levels of the condition as well as a special claustrophobia questionnaire that aids in identifying the possible cause of this form of anxiety. Your doctor can also ask you about your childhood and family history.

How to cope with claustrophobia at home

Not specifically at home, but anywhere you experience the symptoms of claustrophobia.

A lot of claustrophobic people try to avoid the places that can cause anxiety. But sometimes it’s hard or impossible to avoid such spaces, so keep in mind the following tips to be ready to tame your claustrophobic attack:

Don’t resist your claustrophobic attack; otherwise your symptoms can get worse over time. If you have trouble stopping the attack and you start feeling terrified, ask for help.

The key to successfully coping with claustrophobia is accepting and realizing that it’s okay to experience the fear. Just remind yourself that the fear isn’t life threatening and it’ll pass as soon as you want it to.

Psychotherapy is required for people with claustrophobia. There are various types of special counseling that help to fight the fear and prevent the triggers. A doctor decides on what type of therapy you need only after a complete diagnosis. Generally, there are 7 ways to treat claustrophobia with the help of a conventional treatment.

The therapy addresses unhealthy behaviors, emotions, and attitudes. REBT uses a “disputing” technique that helps people with claustrophobia develop healthy and realistic beliefs and prevent the fear from happening.

The cognitive behavioral therapy involves learning how to change and control negative thoughts, which occur during situations that cause your claustrophobia symptoms.

By learning to alter your negative thoughts, you’re more likely to experience less fear. You can eventually learn how to alter your reaction to those situations.

Some claustrophobic people have reported that an exposure therapy helps them handle with their symptoms more effectively.

The therapy is usually used to treat different phobias and anxiety disorders. The exposure therapy involves placing a claustrophobic person in a non-dangerous situation that causes your claustrophobia.

This therapy helps to confront and deal with your biggest fear that triggers anxiety. The exposure therapy is overwhelming and exhausting, but it’s highly effective. The more you become exposed to claustrophobia, the less you might start fearing it.

A therapist might offer various visualization and relaxation techniques to treat claustrophobia.

The most common techniques include mental exercises such as picturing a safe space or counting down from 10. Visualization helps to calm your nerves down and relieve your panic. You may try this technique at home, but in severe cases it’s better to consult a therapist.

Claustrophobia treatment doesn’t typically include medications, but there are situations when a doctor may prescribe an anti-anxiety medication or antidepressants to help treat the intense physical and panic symptoms.

The therapy is still required, though. Plus, it’s important to be careful with these medications as they cause addiction.

You can compare this therapy with people watching. The observing therapy involves watching other people overcome their fears.

The aim of the therapy is to show a patient that they’re not alone and it’s possible to deal with any fear, including claustrophobia.

Some natural products and supplements can also help to treat claustrophobia. For instance, lavender oil or magnesium supplement may help you manage anxiety and panic. Talk to your therapist about it.

Claustrophobia can be treated and you can recover from it, albeit special treatment may be required.

Many people get rid of claustrophobia symptoms as they get older.

But if you can’t live an active and joyful life because of your fear, don’t hope for it to vanish when you are older. Turn to a specialist to undergo a therapy that will ease your burden and help you overcome your fear.