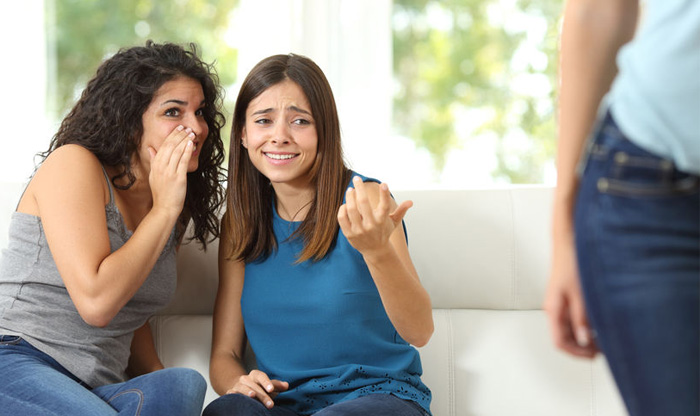 Whether you’ve already heard of defense mechanism or you have no idea what they are, you experience them in your daily life.

We unconsciously use defense mechanisms to protect ourselves from anxiety occurring from intolerable feelings or thoughts. These psychological strategies help you to protect yourself from the feelings of guilt, resentment, or anxiety, which appear when you feel angry, threatened, or broken.

The most common and widely-known defense mechanism, denial is an inability to recognize or acknowledge that something is currently happening or has happened in the past. Those who are in denial aren’t able to admit and face reality. No matter what others say, they keep believing in their own truth, which in fact, can be untrue.

Denial is a defense mechanism that protects your ego from the things you can’t handle. Even though it saves you from pain and panic attacks, denial drains energy and makes you feel worse in the end. Denial is often accompanied by other defense mechanisms to keep those unbearable feelings and emotions from conscious awareness.

Psychologists impute to alcohol and drug addicts this defense mechanism, albeit any one of us is at risk. Personally, I can remember many situations where I was in denial. When my grandma unexpectedly died due to a car accident, I had been in denial for about half a year.

I refused to believe it and kept living with a thought she was alive. I even thought of her as of a person whom I could talk to anytime I felt horrible. Anyone who tried to convince me that my grandma was dead I hated and avoided. The worst thing was when I finally admitted her death and it was a huge shock to me. I needed professional help to cope with emotions and thoughts that were destructing my mind at that time.

Being in denial has destructive consequences, which is why it’s important to seek help as soon as you see that your friend or a family member has been in denial for a prolonged time.

Displacement, also known as displaced aggression, is a defense mechanism that involves taking out your impulses, feelings, and frustrations on those who are less threatening.

For instance, your boss unfairly criticized you today. You said no word, but when you came home, you unfairly criticized your husband or children. Does it sound familiar? I was often guilty of having a defense mechanism of displacement. I believed that I wouldn’t feel relief until I displaced my resentment or anger onto someone or something.

I could yell at my niece or my cat and instantly felt relief and then a pang of horrible guilt. Next morning I smiled at my offender, but couldn’t smile at my niece and here a defense mechanism of intellectualization appeared.

This defense mechanism involves finding an excuse to explain away all the negative consequences of an unpleasant event. I couldn’t smile at my niece and even pretended to be angry at her because I didn’t allow myself to experience guilt or anger.

Instead of admitting that I didn’t have the right to be angry at my niece, I kept believing that she was a trigger of my behavior. The thing is, intellectualization lets us avoid ponder on the emotional and stressful aspect of the event and rather concentrate on the intellectual component only.

This defense mechanism resembles denial, but the difference is you don’t deny the event. You admit it but avoid stressing over it. You simply distract yourself from reality.

Did you ever forget something bad happened to you? Maybe, it’s some awkward moment in your college, or a car accident, or a death of your loved one.

You’re not in denial, though. This time, it’s repression. You can repress any unpleasant event or situation, but it won’t vanish. It might negatively affect your future.

For instance, if you were physically or sexually abused in the college, you might have trouble building relationships or being close to your partner later in life. It’s not easy to work with this defense mechanism, especially if it’s accompanied by denial and suppression.

Denial, repression, and suppression go hand in hand and sometimes coincide, causing you a lot of trouble. When you’re trying to make yourself forget certain person or event and get it out of your awareness, it’s called suppression. People with a broken heart are more prone to suppression.

After a painful breakup, they put tons of effort in removing their ex-partner from their life for good. They undergo all types of anger, resentment, pain, and sleepless nights just to stop thinking about their breakup, which causes the pain and anxious thoughts.

Unfortunately, despite all the efforts, you can still unconsciously remember all the painful thoughts once in a while. Those thoughts might then cause depression and stop you from living a fulfilled life. Even if you manage to build a happy relationship and you’ll have your own family, the painful memories of your ex could pop up in your mind when you least wait for them.

Unlike defense mechanism mentioned above, projection is tricky to understand. It gives you an opportunity to take your own unbearable feelings or qualities and attribute them to others.

Projection lets the expression of the impulse or desire occur but in a way that your ego might have difficulty to recognize, and thus relieving anxiety. People with low self-esteem are more prone to projection than others. I have tons of examples from my own life and I’m sure you have too.

The first time I realized that I was experiencing a defense mechanism of projection was during my first job years. As an introvert with a bit reduced self-esteem, I thought others didn’t respect me, so I stopped respecting them as well. In fact, they might have respected me, but I didn’t know it.

There was one coworker whom I wholeheartedly hated – jealousy was to blame – and I made myself believe that that coworker hated me too. This way, I protected myself from criticism, anxiety, and overthinking by urging myself to be sure that others felt hatred towards me. It was my belief, though, not theirs feelings.

Probably, the healthiest defense mechanism that we should apply more in life is sublimation. This defense mechanism involves turning unhealthy emotions or behaviors into a good habit or action that won’t cause any trouble.

Unlike displacement where you shift your negative emotions onto someone or something, sublimation lets you get rid of those emotions in a healthy and peaceful way. For example, your boss has been criticizing you or underrating you for a week or so and you feel like you’re about to explode any minute.

Most importantly, you don’t want your family to suffer because of the mood swings of your boss. That’s why you get rid of your negative feelings and emotions by running or working out in the gym. Venting is critical and it’s important to vent without hurting anyone.

This defense mechanism is about explaining an unacceptable feeling or behavior in a logical or rational way, staying away from the real reasons for that feeling or behavior. Rationalization typically protects self-concept and self-esteem, as well as helps to alleviate anxious thoughts and regrets.

For example, you failed your final exam and are now blaming your teacher for that. Instead of saying something like, “I should have prepared better for my final exam,” you may say something like, “This teacher provided the information in the wrong way so I couldn’t understand it enough to pass my exam.”

Narcissists often use this defense mechanism to protect their ego and bring another person down. Rationalization helps them to believe they’re the best, others are the worst.

This defense mechanism involves reverting back to a childlike emotional state and making you behave in a childish way – even if you’re in your late 40s.

Regression happens when your unconscious anxieties, fears, and emotions reappear. Everyone reacts to stressful situations in their own way. Someone starts drinking heavily or meditating deeply – like an adult. Others hide under the blanket, run to their moms, or just can’t stop crying all night long.

My niece had a stressful childhood and she had been wetting her bed till 11. Now she’s 14 and luckily she sleeps well at night and her bed is finally dry. However, when a stressful event occurs, she wets her bed again. That’s her defense mechanism that jumps starts under conditions of stress.

In fact, people show regression in different ways. My friend, for instance, runs away from others, hides under the blanket, cries and sleeps until she feels better after a slightly stressful situation. She says it helps her cope with stress fast since she did it when she was a child and her parents yelled at her.

This childish behavior might be innocent, but it has a self-destructing nature. As you don’t allow yourself to feel frustrated, learn the situation that triggered your stress, and deal with your negative emotions in a healthy way, you increase your risk of developing mental disorders.

When you transform your unacceptable emotions, impulses, or behaviors into their opposite, you launch a defense mechanism called reaction formation. Reaction formation is more common between people who once loved each other as well as in one sided love.

Many years ago, one guy was in love with me so much that he was ready to do anything I said just to be with him. Fortunately or unfortunately, I wasn’t in love with him and this triggered his reaction formation.

Once he realized he couldn’t love me anymore because I was in another relationship, he turned his love into an overwhelming hatred. After being an object of his pure and big love, I became an object of his bitter hatred.

Reaction formation can also occur because of guilt, awkward situations, jealousy, and other negative feelings. When one of those feelings occurs, you start expressing the opposite of the feelings you have inside in your ostentatious behavior. This defense mechanism can ruin many relationships and lead to serious consequences, including crime.

When you did something bad to those you love, you immediately start doing something good for them to redeem your fault. Otherwise, you start feeling anxious and stressing over your inappropriate behavior.

In some cases, you can do something good for people, who you either consciously or unconsciously bring down or hurt, only to soothe your guilt and anxiety. This defense mechanism is also common in relationships.

Partners after a fight might start showering each other with compliments after a plethora of offensive words. Undoing is also common in an abusive relationship. People also use this defense mechanism at work to fix their inappropriate behaviors.

Here you have it! The list of all 11 most common defense mechanisms that we have and experience and that might either negatively or positively affect our lives.

There are also a few more defense mechanisms that occur when we feel anxious, such as fantasy, passive-aggression, humor, compensation, avoidance, altruism, aim inhibition, affiliation, and acting out.

You can learn to benefit from these defense mechanisms to reduce highly stressful situations. Be sure, you don’t overuse them, though.

Deep Sleep: Definition, Benefits and How to Get It
Bowel Polyps – Causes, Symptoms, and Treatments