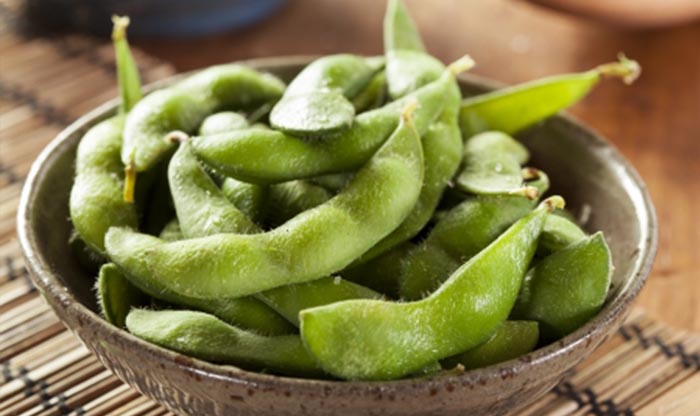 One of the world’s most popular foods, edamame beans are vegetable-type soybeans, which are whole and immature soybeans.

They’re green and are typically sold frozen while still encased in their pods and you can also find shelled edamame.

Traditionally, edamame beans are cooked with a pinch of salt for a quick snack or added to stews, soups, noodle dishes, and salads.

The question is, is edamame healthy? You know, soy foods have got a really bad reputation, especially in the United States. However, a regular consumption of organic edamame has definitely its health benefits and here are some of them:

An increased level of inflammation in the body can cause numerous health issues, particularly arthritis, so it’s important to keep it at bay.

Even though medicine can aid in treating inflammation, it’s a lot better to eat foods that boast potent anti-inflammatory properties.

Edamame helps to fight chronic inflammation, including that in your breathing, and thus may help you relieve a nagging cough.

Bone loss, or osteoporosis, is a widely-spread condition common among older people that’s characterized by fragile and brittle bones that are at a big risk of breaking.

Several observational researches have found that a frequent consumption of soy products, including edamame beans, which are high in isoflavones, can reduce the risk of osteoporosis in middle-aged and older women.

Sure, edamame can’t cure osteoporosis, yet it can help you maintain your bone health.

Soybean foods have been suggested to provide a chemo preventive effect against the symptoms of prostate cancer.

Statistics show that 1 in 7 males have prostate cancer, making it the second most common cancer type in men.

Numerous studies have already been conducted to prove that soy foods, including edamame beans, can ward off prostate cancer.

Although more studies must be done, there’s already clear evidence that eating edamame is beneficial to men’s health.

People suffering from asthma are always looking for any natural way to improve their lung function.

The good news is that a moderate consumption of organic edamame beans can give your lungs a so much needed boost.

Genistein abundantly found in edamame beans have been indicated to enhance the lung function, especially in people who are suffering from asthma.

This health benefit is tricky, though. You should be careful while buying edamame beans because GMO edamame are very common and they can only worsen your symptoms.

This natural condition that each woman experiences at some point in her life, menopause often comes with its harsh symptoms, such as sweating, mood swings, headaches, and hot flashes.

A growing number of studies have already found that soybean products and isoflavones found in them may significantly ease adverse symptoms of menopause.

But, not all menopausal women can experience such relief.

If you want to reap these benefits from eating edamame, you should have the right kinds of gut bacteria.

Certain kinds of bacteria take part in converting isoflavones into a compound called equol, which is responsible for many health benefits of soybean foods.

Women with these specific types of gut bacteria are generally considered as “equol producers.”

Equol producers are usually common among Asian women, which could perhaps explain why they’re less likely to suffer from the menopause-related symptoms when compared to females in Western countries.

Asian women consume a lot of soybeans and soy foods, including edamame, so researchers believe this factor might play a huge role.

We live in the world where the environment can lead to premature aging and increase the risk of cancer.

Moreover, as we get older, it becomes harder to protect our skin and keep it soft and wrinkle-free.

Unfortunately, nowadays, even girls in their early 20s have wrinkles and fine lines.

Alcohol and smoking aren’t the only culprits. Diet can seriously affect our skin health and with all those processed foods it’s much easier to harm our biggest organ.

Edamame beans are a great source of vitamin E, which is known to keep your skin soft and young. Even better, vitamin E is also known to preserve your eyesight, as well as boost your immune system.

100 grams of organic edamame provides your body with 5% of the recommended daily intake of vitamin E.

As mentioned before, edamame beans are fortified with plant compounds called isoflavones.

These compounds resemble the women’s sex hormone estrogen, which is believed to stimulate the development of certain types of cancer, including breast cancer.

Thats why, you should be careful with edamame consumption. A group of researchers have discovered that too much of soybeans can increase the risk of breast cancer, while other studies have proven that eating soybean products in moderation helps to ward off breast cancer.

The conclusion here is to eat edamame beans in moderation, which means no more than a cup of them per day.

While edamame beans can’t compete with nuts, they still can help your brain function better.

Edamame is plentiful in good fats, including omega-3 fatty acids, which aid in keeping your brain and heart healthy.

Eating edamame regularly has also been linked with a reduced level of bad cholesterol.

Speaking of cholesterol, a study conducted by Metabolic Research Group from Lexington, KY, USA, showed that consuming 47 grams of soy protein throughout the day can reduce the combined cholesterol levels by 9.3% and the bad (LDL) one by 12.9%.

The high bad cholesterol level increases the risk of cardiovascular disease, so these scientific results prove that soybeans do have powerful health benefits.

Edamame is one of the best sources of soy protein as well as vitamin K, fiber, and antioxidants, which all help to better the blood lipid profile, a critical measure of the fats including triglycerides and cholesterol. This, in turn, helps to ward off heart disease.

10.Provide all the essential amino acids

Vegetarians and vegans always include edamame beans in their diets because they know that they’re among the best sources of quality plant protein that contain all the essential amino acids.

There are 11 grams of quality protein in 100 grams of cooked edamame and it’s 22% of recommended daily value.

You don’t have to be vegan to get quality protein. Even if you’re a meat eater, there’s always a big risk of protein deficiency because animal protein has already lost its quality.

People who work out hard may want to add edamame in their post workout meal as an additional source of amino acids.

Edamame beans are over-brimming with potent antioxidants, the compounds that help to flush harmful toxins from the body and prevent a host of health issues and conditions.

When the harmful toxins build up within your body, inflammation thrives and your overall well-being suffers. This is where a full-body detoxification is needed to cleanse your body and improve your health.

Let’s be honest, all those detox programs are complicated and hard to follow, so isn’t it easier to consume foods that remove those toxins from the body as soon as they build up? Additionally, antioxidants found in edamame aid in combating the free radicals that may cause premature aging and cancers.

Your immune system plays a key role in how you function throughout the day.

If you don’t have a healthily functioning immunity, even the tiniest task, such as having breakfast might seem impossible. Not to mention that cold and flu become your best friends.

Edamame beans can help you ruin your friendship with diseases and increase your energy levels.

High in copper, edamame is capable of actively aid in preventing numerous illnesses and diseases while maintaining your health healthy.

Edamame provides your body with 15% of RDI of vitamin C in one cup, along with the other vitamins and minerals that strengthen the immune system.

That’s the major reason why most top athletes and gym junkies are starting to add more edamame to their meal plans.

A cup of cooked edamame beans per day can help to build and maintain the muscle mass, and their calorie content will provide your body with enough energy to work out harder.

People who consume plenty of easily digested carbs, like sugar, on a daily basis have a much higher risk of developing chronic conditions and diseases, including diabetes.

That’s because fast carb absorption and digestion spike blood sugar levels, which is a common condition called hyperglycemia. This condition is usually associated with diabetes mellitus.

Similar to other kinds of beans, edamame doesn’t significantly affect the glucose levels.

These beans are very low in carbs and high in protein and healthy fats.

Moreover, edamame has a very low glycemic index, making it suitable for people with type 2 diabetes and those who are trying to follow a low-carb diet.

Finally, edamame beans are loaded with a whopping amount of vitamins and minerals that help us stay healthy.

There are many other vitamins and minerals found in organic edamame beans, so eating them regularly can help prevent nutrient deficiency for sure.

Edamame beans are definitely worth trying but it’s vital to choose organic beans or try to grow your own to reap maximum benefits from them.

17 Foods High in Vitamin B12
Adaptogens: Benefits, Sources, and Side Effects