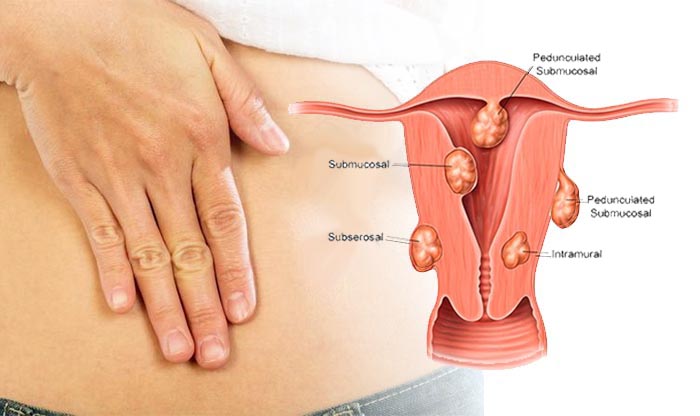 Also called fibromas, uterine myomas, myomas, and leiomyomas, fibroids are firm and small tumors made of fibrous connective tissue and smooth muscle cells that form in the uterus.

These are the most frequently diagnosed tumors of the women reproductive system. The statistics show that 20 to 50 percent of females of reproductive age suffer from fibroids, albeit most of them aren’t even diagnosed.

Another statistic reveals that 30 to 77 percent of females have a higher risk of fibroids during the childbearing years, though 1/3 of the fibroids are big enough to be seen during a physical examination.

In most cases of fibroids, the tumors are non-cancerous (benign). Moreover, these tumors don’t increase the risk for developing uterine cancer. These tumors usually vary in size – from the size of a tiny pea, a softball, to a small orange.

Let’s take a closer look at the types, causes, symptoms, and treatment of fibroids:

What are the types of fibroids?

There are a few types of fibroids women can develop depending on the tumor’s location on or in the uterus. The major types are:

Who are at risk for fibroids?

Women approaching menopause have the highest risk of developing fibroid tumors due to their high estrogen levels. African-American females and those who are overweight or obese can also be at a risk, albeit the researchers are still trying to figure out the reasons for it. Several random studies have found that certain factors may help to reduce the risk of developing fibroids.

There’s also evidence that women who gave birth to at least two babies have one-half the risk of uterine fibroids than those who have no kids. Even though researchers still doubt if having a baby can protect women from fibroid tumors, they do claim that this factor plays an important role.

Women with a family history of fibroids and those older than 30 are at risk as well. Pregnant women can suffer from fibroids as well. Hypertension or high blood pressure has also been shown to increase the risk of the fibroid tumors.

What are the major causes of fibroids?

There are no proven causes of developing fibroid tumors, but scientists state that there are 3 leading causes:

What are the major symptoms of fibroids?

The symptoms depend on the size and location of fibroid tumors and the number of them you have. For example, women with submucosal fibroids typically have trouble conceiving or experience heavy menstrual bleeding each month.

If you’re going through menopause or your fibroid tumor is small, you might not experience any symptoms. The fibroid tumors may become smaller or vanish during and after menopause. That’s because menopausal women have the lower levels of progesterone and estrogen, the hormones that feed the growth of fibroids.

Regardless of the type of fibroids you have, you can experience the following symptoms:

How to diagnose fibroids

Some additional tests might be needed to detect fibroids, but mostly the aforementioned procedures help to set an exact diagnosis.

Can fibroids cause cancer or any other serious diseases?

While most uterine fibroid tumors don’t cause cancer, in some cases, a removal is needed to prevent any serious conditions and ward off cancer.

The rapid growth of the tumor can be seen as a rare cancerous type of fibroid, which is called leiomyosarcoma. The fast-growing tumor requires special treatment and often can’t be distinguished from a benign fibroid by MRI, ultrasound, or any other imaging examination.

But luckily, this type of the fibroid tumor appears in less than 1% of all the uterine fibroids.

What are the treatments for fibroids?

Because most types of fibroids shrink or simply stop growing when women approach the menopausal period, doctors usually suggest the “watchful waiting” approach rather than surgery.

If any significant or alarming developments or changes occur, further treatment is required. But mostly, fibroids can be treated with natural home remedies and lifestyle changes.

Massage, yoga, and acupuncture have been proven to help women with fibroids.

If you experience mild to severe cramps, you can consider applying heat. This treatment is harmful if you have heavy bleeding. If you’re overweight or obese, it’s vital to start a healthy weight loss process. Reducing the stress levels can positively affect your fibroid treatment.

You should also pay attention to the foods you put in your body. There are certain foods that can either ease the symptoms of fibroids or worsen them. When struggling with this condition, make sure you’re consuming the following foods on a daily basis:

When fighting fibroids, make sure you eliminate the following food items from your eating plan:

When dietary and lifestyle changes aren’t enough to combat fibroids, you may need a special medical treatment.

Gonadotropin-releasing hormone agonists, including leuprolide, are also prescribed to lower the levels of progesterone and estrogen levels, which both contribute to the growth of fibroids. These medications stop the menstruation cycle and fight fibroids.

There are also some other medical options that don’t reduce fibroids, but help to alleviate the pain and control bleeding. They are:

There are a number of surgical treatments used to fight fibroids. The rare surgical intervention is hysterectomy, which involves the removal of the uterus along with the fibroids.

The most common surgical treatment is myomectomy, which involves the selective removal of the fibroid tumor within the uterus. This treatment can be performed through a laparoscope, hysteroscope, or with the standard surgical incision on the abdominal cavity.

Other treatments involve the fibroid removal with the help of cryosurgery (freezing probes), laser fibers, and other destructive methods. These treatments don’t remove the tissues but fight the tumor in place. If there’s any risk of malignancy in case of the uterine mass or leiomyoma though, surgery is a must.

The uterine artery embolization is another surgical treatment women with fibroids undergo. This method uses the tiny beads of polyvinyl alcohol.

The beads are injected through a special flexible tube (catheter) into the uterus arteries, which feed fibroids. Polyvinyl alcohol prevents the constant blood supply to the fibroids, starving them of oxygen and blood.

The uterine artery embolization is rather a new method of treating fibroids and it increases the risk of readmissions to the hospital and even some complications.

Uterine artery occlusion is a potential alternative to uterine artery embolization. This technique is under investigation but it’s known that it involves clamping the uterine arteries that feed fibroids.

Another new treatment is high-intensity focused ultrasound that helps to remove fibroids and treat other abnormalities.

Are there any supplements that help to treat fibroids?

There are really a few supplements that promise to help you with fibroids, but be sure to talk to your doctor before taking any. Generally, women with fibroid tumors take supplements, such as:

Fibroids might not be as scary as other conditions, but it doesn’t mean you should ignore them. If you’ve noticed any symptoms, see a doctor as soon as possible. Early treatment will help you avoid serious complications.