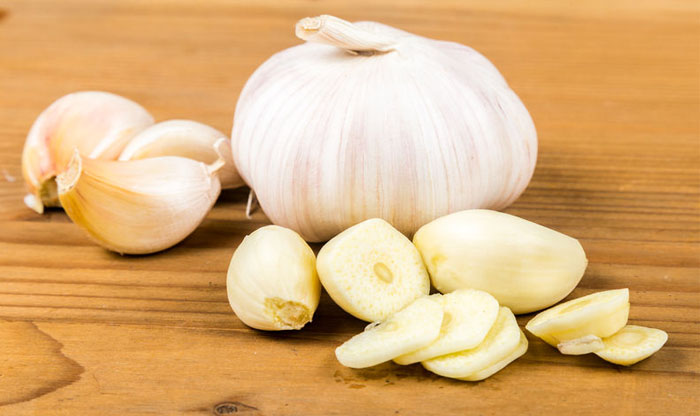 One of the most powerful natural antibiotic, garlic boasts myriads of health benefits.

Garlic is known for its intense flavor and aroma and is used in almost all cuisines worldwide.

It has great antibiotic, antifungal, antimicrobial, and antiviral properties and has been used for thousands of years to ward off various conditions, including plague in the 1700s. Garlic aids in strengthening immune system, fighting free radicals, and protecting the body from the harmful bacteria. There are many reasons to consume garlic regularly and here are some of the best ones:

Garlic is good for diabetics as it has been proven to aid in controlling the blood sugar levels. Therefore, garlic is believed to help decrease or prevent the effects of many diabetes complications. Moreover, garlic helps to encourage circulation, lower LDL cholesterol and combat infections.

A recent research has showed that eating garlic regularly can improve the overall health of people with diabetes, as well as stop the mitigation of the diabetic complications such as nephropathy and atherosclerosis.

Another research also found that garlic can significantly improve the blood cholesterol levels in patients with type II diabetes. In particular, a regular garlic intake decreases a total cholesterol and bad cholesterol (LDL) and slightly increases the HDL cholesterol when compared to placebo.  This means, garlic is a healthy addition to a diabetic diet plan.

The form of dementia, Alzheimer’s disease prevents people from thinking clearly, performing daily tasks and even remembering who they are.

Powerful antioxidants found in garlic help to maintain the protective mechanisms of the body against an oxidative damage, which might lead to these cognitive conditions as well as speed up the aging process.

Several studies have concluded that high amounts of garlic supplements helps to boost the antioxidant enzymes in the body and significantly lower the oxidative stress levels in people with a high blood pressure.

This helps to reduce the chances of developing the common brain diseases such as dementia and Alzheimer’s disease. Since garlic supplements have some serious side effects it’s best to eat organic garlic or consult a doctor when considering supplementation.

A number of clinical trials have demonstrated the way garlic can help to treat moderate hair loss and baldness. A group of researchers from the Mazandaran University of Medical Sciences in Iran claimed that applying a garlic gel onto the scalp at least twice a day for 2 to 3 months could help to keep hair healthy and prevent hair loss. Garlic can also affect patients who take corticosteroids for treating alopecia, which is a widely spread autoimmune skin disease linked to a hair loss on the face, scalp, and on other parts of the body. Since there’s no cure for this disease, it’s better to prevent this condition by eating garlic regularly.

Related:   Fennel seeds health benefits (and ways to use)

The scientists also showed that applying a garlic gel to a problematic area along with the use of topical corticosteroid, could help to alleviate alopecia areata.  Even though more research is required to prove this fact, using a garlic-infused coconut oil can be an effective hair loss remedy as it lowers the likelihood of absorbing dangerous corticosteroids in the skin.

Researches have proven that allicin found in garlic aids in fighting microorganisms, which trigger lots of infections, like cold and flu. Garlic is considered as a natural antibiotic and thus a regular consumption of it can help to ward off cold and flu and many other infections.

A study done by the Garlic Centre, UK, which involved 146 individuals who took a placebo or garlic supplements for 12 weeks during the cold season.

People who took garlic supplements had a reduced risk of getting a cold, and even when they did catch a cold or flu, they were more likely to recover much faster than those who took a placebo. Volunteers who took a placebo had an increased chance of catching up to one cold over the entire winter season. Researchers believed that volunteers who took garlic supplements had a stronger immunity thanks to its biologically active component called allicin.

The antifungal, antiviral, and antimicrobial properties of garlic can also help to fight the rarest infections that cause complicated diseases and conditions.

A research conducted by the University of Adelaide, South Australia, studied the effect of the aged garlic extract and found that it could be used as an additional treatment for patients taking medications that were supposed to reduce high blood pressure yet were ineffective. Garlic might be an excellent alternative to antihypertensive medications.

A research appeared in the scientific journal Maturitas, involved 50 volunteers with the hard-to-manage blood pressure and stated that taking at least 4 capsules (960 milligrams) of the aged garlic extract each day for 3 months helped to decrease blood pressure by about 10 points.

One more 2014 study revealed that garlic boasts an incredible ability to reduce blood pressure in people suffering from hypertension. This ability is highly similarly to the work of the standard blood pressure medications.

Garlic was used in the form of the highly tolerable and standardizable aged garlic extract. The results showed that polysulfides in garlic promote the widening or opening of the blood vessels and, thus promote the blood pressure drop.

6.Garlic is high in nutrients and low in calories

If you’re looking to lose weight, garlic should become a staple in your kitchen. Garlic is plentiful in vitamins, minerals, and antioxidants while being a ridiculously low in calories.

Garlic is also a great source of trace amounts of many other nutrients, making it a nutrient-dense superfood to consumer each day for an optimal health.

Thanks to the beneficial health effects of garlic, you can live longer and prevent premature aging. First of all, a daily garlic consumption helps to regulate blood pressure that reduce the risk of developing heart attack and stroke.

Secondly, garlic wards off infections and inflammation, and all the illnesses and conditions related to them. Plus, the fact that garlic aids in combating infectious illnesses is highly crucial for longevity. The majority of infectious diseases are the common causes of premature death, particularly in those suffering from the dysfunctional immune systems.

Read more: 11 Health Tips That Will Gift You 10 Extra Years of Life

A frequent consumption of fresh garlic helps to increase the estrogen levels in women and reduce the chance of bone loss.

A research conducted by the Shahid Sadoughi University of Medical Sciences, Iran, which involved 44 women showed that a daily dose of 2 grams of raw garlic or dry garlic extract greatly reduced the estrogen deficiency in menopausal women with osteoporosis.

Onions and garlic are the most common allium vegetables, which are known for their bioactive sulfur compounds.  Garlic takes an active part in every stage of any cancer formation and can affect some biological processes that prevent or treat the cancer, according to a study.

Multiple researches have found a link between a great consumption of garlic and lowered risk factor of certain cancers, such as cancers of the colon, stomach, esophagus, breast, and pancreas.

The National Cancer Institute stated that the protective effects of garlic are mostly due to its antibacterial abilities. Garlic also aids in blocking the formation of the substances that cause cancer. It helps to stop the activation of these substances, reducing a cell proliferation, boosting DNA repair, or inducing cell death.”

Another study done by French scientists that involved 345 female volunteers showed that women with breast cancer can greatly benefit from a frequent garlic consumption. A study found that a regular consumption of fiber, onion, and garlic were linked to a statistically lower chance of developing breast cancer.

Pancreatic cancer is another type of cancer that garlic can aid in treatment and prevention. Since it’s one of the most dangerous forms of cancer, you can relieve the symptoms or decrease your chance by incorporating fresh garlic into your everyday meal. No wonder vegan and vegetarians are less likely to have pancreatic cancer because their garlic consumption is astonishingly high.

Another research done by a group of scientists from the San Francisco Bay area showed that the risk of pancreatic cancer was about 54% lower in individuals who consumed the bigger doses of onions and garlic compared with people who consumed garlic one in a while. The research also stated that eating more fruits and vegetables aids in stopping pancreatic cancer from developing.

When it comes to reducing the cancer risk, the organosulfur compounds found in garlic, including ajoene, DADS, DATS, and SAMC, help to stop the cancerous cells from growing. In general, garlic is one of top cancer-fighting foods worldwide that should be eaten daily.

Garlic works as a preventative agent and is used in a treatment of most heart and metabolic illnesses and diseases, such as hyperlipidemia, atherosclerosis, thrombosis, diabetes, and hypertension.

A scientific review of clinical studies and experiments of garlic health benefits concluded that an increased consumption of both fresh garlic and its powder stimulates the cardioprotective effects, reducing the risk of heart disease.

Most importantly, garlic helps to reverse the early symptoms of cardiovascular disease by unclogging arteries of the plaque build-up.

A randomized research published in 2016 in the Journal of Nutrition, which involved 55 volunteers with metabolic syndrome, aged from 40 to 75 year old, demonstrated that the aged garlic extract helped to get rid of the plaque in the arteries supplying the blood to the heart.

When these coronary arteries are clean, your risk factor of developing heart disease or stroke significantly drops.

Garlic has been used for centuries to fight chronic fatigue and increase the productivity levels. Therefore, it’s believed to help people to boost their athletic performance. Add some fresh garlic cloves to your lunch salad before hitting the gym for a more intense workout.

There’s no single reason to skip garlic when cooking. Thanks to its awesome health benefits, you’ll instantly improve your well-being. However, don’t forget about moderation and be careful if you’re suffering from heartburn or any other chronic diseases.