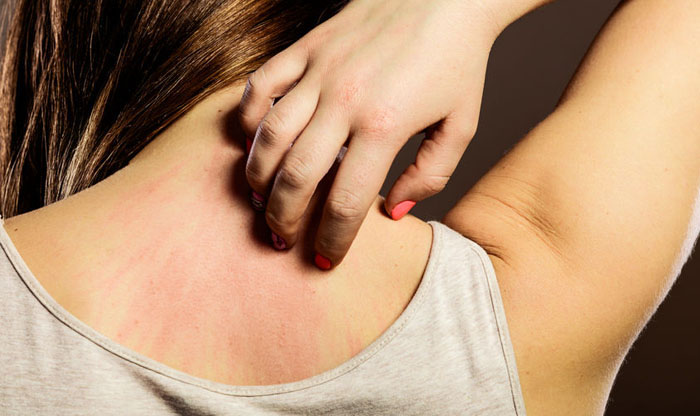 Itchiness is an uncomfortable urge or desire to scratch on the skin. It is triggered by histamine which is a chemical associated with immune responses in the body.

Rashes and itches are symptoms that go hand in hand. However one can experience itchy skin without observing a visible or noticeable change on the skin.

Skin itch is also known as pruritus. Itchy skin may appear red, normal, bumpy, or rough depending on the cause. Itches are categorized into four groups; Neurogenic itch seen in liver and kidney diseases, Proprioceptive itch that occurs in response to allergic reactions, Psychogenic itch that occurs in response to chemicals like serotonin which influence stress and Neuropathic itch caused by obstruction of the nervous system.

Itches vary from slight to extreme. A person experiencing itching with no identifiable cause is advised to seek a doctor to determine the cause as well as acquire treatment advice. Below are causes of itching with or without a rash:

Dry Skin: This is also known as xerosis and is a common cause of itchiness. It is caused by a lack of adequate moisture on the skin, making it feel itchy and appear scaly. Older adults are particularly prone to dry skin problems, especially during the colder months.

Pregnancy: Itching is a common problem for women during pregnancy, occuring in more than 1 in 10 expectant mothers.

There are also conditions that affect the nervous system which can cause irritation and other sensations in the skin without a visible rash. Some of these conditions are: multiple myeloma, pinched nerves, postherpetic, neuralgia, stroke, and multiple sclerosis.

From research conducted by the American Academy Of Dermatology, a complication of diabetes – namely diabetic neuropathy – can cause a range of skin issues by damaging the nerves.

Obviously, other nerve injuries can also cause skin to feel itchy.  The location of the nerve injury determines the area that feels itchy. A person who suspects they might have a nerve disorder is advised to seek the appropriate treatment, depending on the underlying course. The person’s symptoms should enable the doctor to ascertain the cause.

Liver disease: Liver disease is known to cause itching due to the accumulation of excess bile in the body. Some examples of liver diseases are hepatitis and cirrhosis.

Itching due to liver disease frequently affects the soles of the feet and the palms of the hands. People are advised to avoid exposure to heat, as this will worsen the symptoms. Treatments are advised by a doctor according to the diagnosed liver disease. Another form of treatment is a prescription of cholestyramine to reduce the itching.

Kidney disease: People diagnosed with kidney problems who develop itchy skin should contact their doctor. Kidney disease is known to cause itching with no rash especially during the advanced stages of the disease, called end-stage renal disease.

Some kidney disease is caused by Lupus, an autoimmune condition which displays a wide variety of skin and mucous membrane symptoms that range from rashes to ulcers. A common feature of Lupus is a face rash which crosses from cheek to cheek over the nose, which may worsen on exposure to the sun. Doctors prescribe medication to help people experiencing itching skin from kidney disease.

Medication side effects: Itching skin can be a side effect of some drugs. This is a common side-effect of many medications and is likely to occur with or without a rash.

Related:   10 Signs You Probably Have Obsessive Compulsive Disorder (OCD) + How to Treat it

Some of these medications include drugs designed to lower blood pressure and pain relievers in the opioid group, e.g. morphine, fentanyl, and acetaminophen.

If a medication causes itching, communicate with the prescribing doctor, who can advise on the best alternative medications or recommend hydroxyzine or Benadryl drugs to alleviate the itching.

Psoriasis: This internal health condition causes the body to produce an excess of skin cells, which then pile up in itchy, inflamed patches on the skin’s surface.

Hodgkin’s Lymphoma: This is a cancer of blood cells and it causes skin itching without a rash. Hodgkin’s Lymphoma is treated with radiation therapy, chemotherapy, and stem cell / bone marrow transplant.

Allergic reactions: Depending on the severity, this can be viewed as a medical emergency. Substances like cosmetics and nickel may cause itching when they come into contact with the skin since they contain allergens which can cause reactions on the skin including itching and raised welts which are red and scaly.

Some other substances that can cause these allergic reactions are wool, soap, fragrances, cement, and nickel products that we use daily like phones, jewels, and zippers. The development of an allergic reaction causes a rash and uncontrolled itch as the immune system reacts to the allergens on the skin.

Bug bites: Many bugs can bite a persons’ skin, leaving it feeling itchy and irritated. These bugs include lice, mosquitoes, spiders, and bed bugs. Their bites leave very tiny pinprick holes; so small that an individual experiencing the itching cannot see them. These bites are treated depending on which insect caused them.

The advice is to avoid scratching the area of an insect bite because it makes the itching worse. A person experiencing a prolonged itch after a bug bite is advised to see a doctor. People are also cautioned to avoid the use of over-the-counter drugs (e.g. Neosporin) which can cause allergic reactions on the skin in some individuals.

Candida: This commonly occurs in skin folds like at the buttocks, or under the armpits and breasts. It begins with a stinging and itching that leaves a burning red rash with a wet appearance and dry edges. This is caused by a fungus and can be treated easily.

Itchy skin condition: These are conditions of the skin that causes long-lasting and intense itching. Examples are chickenpox, ringworm, and dyshidrotic eczema.

Overactive or underactive thyroid gland: Body itchiness is a common symptom related to hypothyroidism and hyperthyroidism. These disorders may cause itching with no rash.

This is because body cells, including those that make up the skin, stop working effectively and eventually dry out. This symptom is likely to occur with other thyroid-related symptoms. Taking antihistamines alongside thyroid treatment helps relieve itching.

Iron deficiency anemia: This is a condition in which there is a shortage of red blood cells in the body, due to a lack of iron. Itchy skin without a rash is one of the symptoms of iron-deficiency anaemia. More itchiness is experienced in serious cases of iron deficiency.

Measles: This virus is characterized by a red rash that spreads from the face down to the body within three to five days of infection.

Scabies: Scabies is a skin condition that takes four to six weeks to appear after infection. Its symptoms are an extremely itchy rash that has small blisters and appears pimply and scaly.

Cancer of the skin: This can be characterized by itching  and the appearance of new skin lesions, which is an early symptom of skin cancer.

Skin cancer does often cause noticeable symptoms and people are advised to care for their skin daily and seek a doctor’s advice if they observe any unusual changes and moles on the skin. Skin biopsy is an appropriate test to determine the causes of skin change, including itchiness.