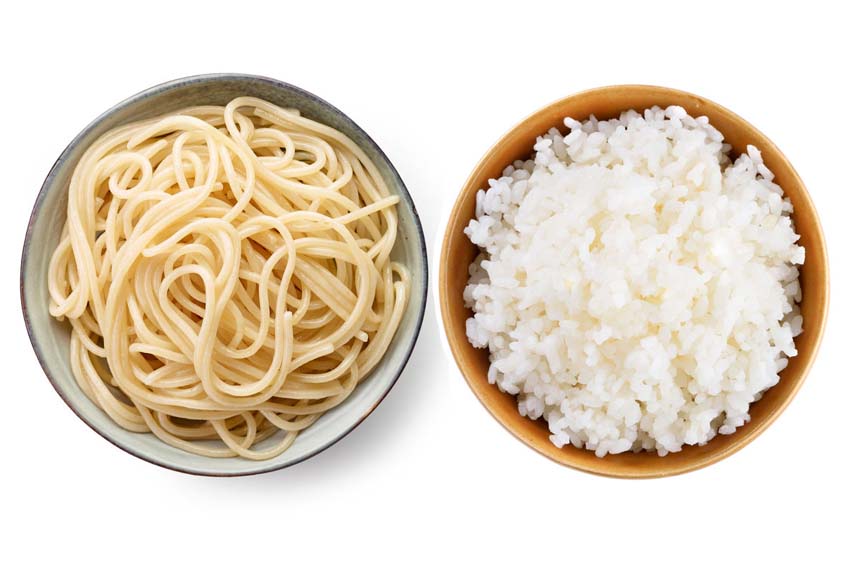 The low carb diet has blossomed in popularity over recent years, and weight loss is the biggest reason for its use.

The low carb diet is also recommended for people suffering from diabetes and other diseases and disorders. Whether you’re considering this type of diet or you’ve just started to follow it, you should know which foods you should eliminate from your low carb diet right now:

Legumes like lentils and beans are extremely rich in carbs. That’s why you should limit your consumption of them.

Rice, peas, and corn aren’t recommended in a low carb diet either. 100 grams of quinoa contains about 18 grams of carbs and thus should rarely appear on your low carb shopping list.

Cauliflower fried rice is an excellent alternative to grains. If you can’t limit your consumption of grains and legumes, you can simply reduce your portion sizes.

If you’re on a low carb vegan diet, don’t eliminate lentils from your eating plan. Instead, add small amounts on a daily basis. This will help you get your fiber and protein without eating too much carbs.

Eating a few slices can put you over or near your daily recommended intake of carbs, depending on your carb tolerance. If you can’t give up bread, look for low carb bread like Ezekiel bread or make your own at home.

A budget-friendly staple in many families worldwide, pasta isn’t for those who are on a low carb diet. (3)

A cup of cooked pasta supplies the body with 43 grams of carbs. (4) Of course, the carb content highly depends on the type of pasta you eat, yet be ready to eat as much as 30 grams of carbs per portion.

The best way to combat your pasta cravings is to have shirataki noodles or spiralized vegetables, such as cucumber, zucchini, bell pepper, parsnip, carrot, sweet potato, etc.

If you can’t completely overcome your pasta cravings, scale down your regular portion and have pasta no more than twice a week. If your goal is to drop weight on a low carb diet, then it’s best to eliminate pasta from your eating plan.

Veggies are loaded with nutrients that our bodies need to function properly. While fiber-rich veggies are helpful in weight loss, high starch vegetables can do more harm than good. That’s because starchy veggies are high in digestible carbs.

When you consume digestible carbs, the body turns them into glucose, which ends up in the bloodstream. In other words, digestible carbs significantly increase your blood glucose, then make it crash, leaving you feeling drained of energy.

As a result, you end up eating more carbs to boost your energy.

Did you know that some fruits are high in carbs? When creating your low carb eating plan for a week, be careful with your fruit consumption.

One medium-sized banana, for instance, contains about 27 grams of carbs. Mango is another fruit that can increase your carb intake. One cup offers 28 grams of carbs. Apples and pineapple are also considered to be high carb fruits.

It doesn’t mean that you should stop eating these fruit altogether; just limit your consumption and consider adding more berries to your diet instead.

Dried fruits like raisins and dates have a rich carb content as well. 2 large dates yield 36 grams of carbs while one ounce has 22 grams of carbs. People on a low carb diet aren’t advised to consume dried fruit, at all.

Related:   5 Foods That Can Relax Your Stress

Unsweetened yogurt might not be delicious, but it’s low in carbs. On the other hand, sweetened yogurts are more popular as they have a variety of flavors and so-called add-ons like granola.

These yogurts are extremely high in sugar and some contain up to 50 grams of carbs in a single cup.  Sweetened nonfat and low-fat yogurts shouldn’t be on a low carb diet, either. Top your unsweetened yogurt with fresh or frozen berries to keep your carb consumption under 10 grams per serving.

A gluten-free diet and the low carb diet have entirely different eating rules. Some gluten-free baked goods like bread and muffins can even contain more carbs than non-gluten baked goods.

Moreover, the flour found in most processed gluten-free baked goods is usually made from grains and starches, which tend to spike blood glucose levels in the body. (5) As mentioned before, it’s better to make your own low carb bread or muffins using either coconut or almond flour.

Being rich in B vitamins, potassium, and calcium, milk seems to be a great addition to any diet, except for plant-based ones. If you stick to a low carb diet though, you should eliminate milk from your meal plan.

Regardless of whether milk is fat-free or low fat or whole, it’s better to swap it for coconut or almond milk instead.

If you’re used to snacking on crackers – even whole-grain and whole-wheat varieties – it’s time to change this snacking habit.

The thing is, crackers are packed with carbs, just like any grain-based snack foods. Look for low-carb crackers made from almond flour.

Anything that contains sugar should disappear from your carb-restricted diet. There are about 13 grams of carbs in a single tablespoon of white sugar.

Besides white sugar, limit your consumption or ditch sweeteners like honey, agave nectar, and maple syrup, which contain 13 to 17 grams of carbs in one tablespoon.

Stevia is a healthier alternative to white sugar and other high carb sweeteners.  When compared to white sugar, stevia has good nutritional value and is low in carbs. White sugar has been shown to have a detrimental effect on health. (6, 7)

Unless you make your own juice, this is something you should avoid completely. Juice contains carbs, which are rapidly digested, causing an immediate increase in blood glucose levels.

By drinking a glass of grape or apple juice, you provide the body with 48 to 60 grams of carbs. Store-bought fruit juices are also over-packed with added sugars, which are harmful to your health.

Veggie juices are lower in carbs and added sugars, but still, store-bought versions should never be on your low carb diet plan. Blend some low carb smoothies, instead. Not only will you lower your carb consumption, but you will also strengthen your immune system.

Low carb diet looks a bit daunting, but with a few food swaps, you can enjoy an eating plan that will contribute to your overall health.

Take baby steps while following a carb-restricted diet since many foods, including fruit and veggies, or beans, are still high in nutrients.

When creating your low carb diet menu, make sure you incorporate a lot of nutrient-dense foods to avoid deficiencies.

Vitamins and Minerals of Especial Importance to Women
Can You Eat Too Much Avocado?