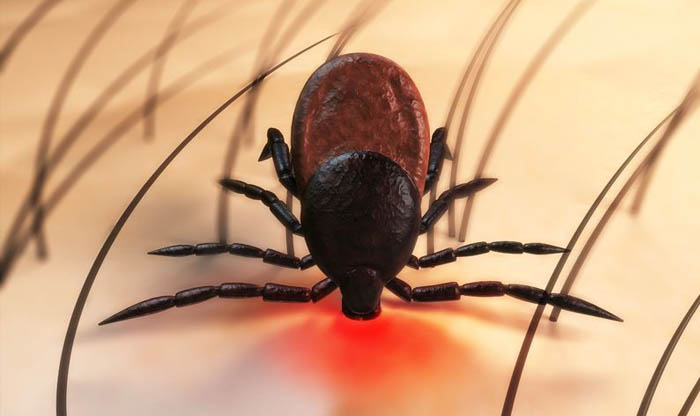 Lyme disease is a condition caused by a bite from ticks, which are infected by the bacterium called Borrelia garinii, Borrelia afzelii, (both in Europe), or Borrelia burgdorferi (in the U.S.).

Such bites affect the joints, skin, nervous system, and even heart. Lyme disease develops in several phases and can lead to serious consequences if left untreated. Since it’s often difficult to prevent this disease, learning about it will significantly ease the symptoms and speed up the recovery process.

The tick-borne disease, Lyme disease is caused by a spirochete bacterium. The bacterium is spread by infected ticks.

When these ticks bite the skin, even the tiniest bite starts to promote the transmission of the spirochete bacterium through the skin, instantly infecting the body.

Although it’s not contagious, it’s critical to spot and treat Lyme disease as soon as possible as it causes abnormalities in the nervous system, joints, and heart. There’s no transplacental transmission of Lyme disease from a pregnant woman to an unborn child.

What are its risk factors?

Lyme disease can affect everyone, but 5 to 14 years old children and adults in their 40s and 50s are more prone to the infection.

The biggest risk factor for this condition is an exposure to the ticks in the high-risk areas like forests, parks, fields, and other recreational areas.

Depending on where you live, you can catch Lyme disease when playing outdoor games, gardening, or simply walking in the park. Individuals with a weak immune system have also a higher risk of developing Lyme disease than those with a strong immunity.

What are the most common symptoms of Lyme disease?

Lyme disease can affect different areas and parts of the body in different degrees as it develops. The area where a tick bites is the initial spot where the bacteria start entering the system through the skin.

If not treated immediately, the bacteria start spreading in the skin away from the tick bite. If a tick is present on the skin for about 2 days, the infection transmits and causes a growing reddish rash that’s usually associated with the symptoms similar to flu.

Many people with Lyme disease – especially those with a strong immune system – are unaware of a tick bite for weeks and months because of reduced amounts of symptoms they spot.

Lyme disease can be tricky to diagnose, particularly at the early stage of it. There are three stages of the condition:

After the tick bites, the early symptoms become to be visible in 7 to 14 days.  The so-called bull’s eye rash is one of the earliest symptoms of Lyme disease.

It’s a warning sign that bacteria begin to multiply in the bloodstream. The erythema migrans, which is a classic initial rash, occurs at the area of the tick bite in the form of a central red spot with a clear spot surrounding it and a redness spot at the edge.

Even though it doesn’t cause the pain, the bull’s eye rash is usually warm to the touch and it may itch. Some people have a solid red rash, while those with dark complexions have a rash spot that resembles a small bruise.

Related:   10 Signs You Probably Have Obsessive Compulsive Disorder (OCD) + How to Treat it

The redness of the skin can be accompanied by the muscle and joint stiffness and pain, mild fatigue, headaches, and rarely fever. Many people believe they have a viral infection like flu. The rash resolves, in about a month without treatment. Several weeks after the initial skin redness, the bacteria start spreading throughout the body, affecting the joints, nervous system, and heart. And it’s the beginning of the second stage.

A few weeks or months after the tick bite when the first stage was ignored, the early disseminated Lyme disease develops. This stage is hard to ignore as the symptoms are more vivid and serious because of the bacteria spreading throughout the whole body.

The different types of headaches, muscle aches, severe fatigue, vision changes, sore throat, enlarged lymph nodes, fever, and chills are the most common symptoms of the early disseminated Lyme disease. The redness may occur in the areas far from the initial tick bite and it can itch. When the disease left untreated, the neurological issues, including Bell’s palsy, tingling, and numbness can appear.

The last stage of Lyme borreliosis is the most dangerous one since it can lead to heart failure and even death.

Late disseminated Lyme disease can occur after weeks, months, and in rare cases, years after the two stages of the diseases were untreated. The time period highly depends on how strong the immune system is or which other conditions you have.

Some researchers have also linked late disseminated Lyme disease to anxiety disorders and depression. But more studies are required to prove this fact.

Most of the times, doctors have no problems when diagnosing the first stage of Lyme disease. They can set a diagnosis without any specific tests. However, when it comes to the second and third stages, a blood test is required to detect antibodies to Lyme bacteria. The following tests may also be needed at the later stages of the disease:

Lyme disease is generally treated with a range of antibiotics. The widely-used antibiotic treatment for the disease is a combination of doxycycline, cefuroxime axetil, or amoxicillin antibiotics, which must be taken for 2 to 4 weeks. Antibiotics help to combat all traces of the infection, but they don’t help everyone. Some patients don’t respond well to the aforementioned antibiotics, especially those with the infections that already spread through the nervous system.

People who don’t ask for a medical help might not react well to antibiotics too. Moreover, antibiotics treat the actual infection, which is a small part of Lyme disease. They don’t eliminate the entire condition and its symptoms. More additional treatments might be required to cure the health issues related to Lyme disease, including inflammation, headaches, joint pain, swollen joints, sleep disorders, heart rhythm disturbances, meningitis, etc.

Since antibiotics can lead to a host of side effects and they can’t be used in pregnant and breastfeeding women and people who are reactive/allergic to them, your doctor can recommend you to try natural remedies. Unlike antibiotics that weaken the immune system, natural remedies can help to strengthen it.

The problem is, antibiotics negatively affect the gut bacteria, particularly if you’ve been taken them for more than 2 weeks. Besides killing harmful bacteria, antibiotics can ruin good bacteria as well. This can lead to even weaker immune system and make Lyme disease symptoms get worse in some patients.

You can avoid these side effects by trying the following remedies – with your doctor’s permission, of course:

Turmeric boasts antibacterial and anti-inflammatory properties and it’s a powerful antioxidant that fights several infections, including the infection caused by Lyme disease.

Turmeric helps to flush harmful toxins from the body and reduce the inflammatory process. There are two ways you can use turmeric to treat Lyme disease.

Consider incorporating it into your meals each day or every other day. Or, mix turmeric with water to make the paste and apply to the infected areas 2 to 3 times during the day for at least 3 days. Be sure to consult with a doctor before using the second method.

One of the best natural antibiotics, garlic is renowned for its rich antioxidant content as well as antifungal, antimicrobial, and antiviral properties.

A research done by Weizmann Institute of Science, Israel, found that an active component in garlic called allicin has antimicrobial abilities that kill any bacteria and treat infections in a natural way.

Unless you’re pregnant or have a bleeding disorder, you can use Reishi mushrooms to treat Lyme disease.

These mushrooms have been used to treat bacterial and viral infections for centuries. There are Reishi mushroom supplements if you can’t find them raw.

One of the most powerful natural antibiotics, Echinacea has been shown to kill the most harmful forms of bacteria.

It also has potent immune-boosting properties, giving your system enough power to resist and fight Borrelia burgdorferi. Echinacea extract or supplement can be taken to treat Lyme disease.

Apart from antimicrobial and antiviral properties, Cat’s claw helps to relieve the symptoms of Lyme disease, including fatigue. There are Cat’s claw extracts and supplements that treat Lyme disease topically or internally. But since it has many side effects, it’s important to consult a doctor.

Berberine found in goldenseal and barberry possesses antimicrobial, anti-inflammatory, and antibacterial properties inhibit the growth of the bacterial diseases, including Lyme disease. They’re available in the form of supplements.

With a concentration from 0.165% to 0.00032%, grapefruit seed extract is considered as an effective, natural topical cure for Borrelia burgdorferi.

It’s usually applied topically over the infected area to relieve the rashes and itching caused by the bacteria.

The traditional Chinese medicine, astragalus has been used as a natural remedy to treat a number of pathogen-based illnesses and diseases, including Lyme disease.

It has strong antibacterial abilities and immune-boosting properties that help to alleviate the mild symptoms of the disease.

Another Chinese herb, Artemisia annua is an antimalarial agent that has shown the positive and powerful activities against the bacteria, including Borrelia burgdorferi, that can cause Lyme disease. Artemisia annua is available in the form of supplements.

How to prevent Lyme disease

One of the most effective ways to ward off the bacteria is to spot and remove a tick with tweezers as early as possible.

Whenever you spend your time in the park or forest, check your body for the ticks. If children and pets visit the wooded areas or you have a wooded backyard, be sure to check them regularly.

Even if you already suffered Lyme disease in the past, you’re still at a risk of getting the bacteria again. So the next time you go to the wooded area, wear a long-sleeve shirt, long pants, and a hat. You can also use any insect repellent or the oil of lemon eucalyptus to protect yourself from the ticks.

Most importantly, make sure your diet consists of all the essential nutrients and antioxidants to maintain a strong immune system. People with weak immunity are more likely to suffer from Lyme disease.

Even with all the preventive actions, it’s still possible to catch Borrelia burgdorferi, so if you’ve noticed any early signs of Lyme disease, see a doctor immediately.