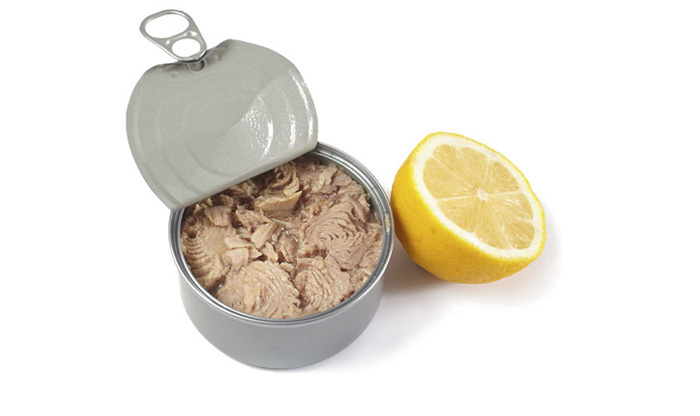 One of the most popular fish worldwide, tuna often used in Asian, European, and Australian cuisines, albeit most countries can consume canned tuna only.

Since fish has a host of the powerful health benefits, it should be one of the staples in your house – unless you’re vegan.

From lowering the risk of heart disease to keeping the eyes healthy, a moderate consumption of tuna can significantly improve your health.

Rich in selenium, phosphorous, iron, magnesium, potassium, niacin, riboflavin, and vitamins B6 and B12, tuna, including canned version, helps to ward off numerous diseases. Whether canned or fresh, tuna fish can significantly improve your overall health.

One can of light tuna in water provides your body with:

Although inflammation is essential for combating foreign invaders and protecting the body from infection and illness, chronic inflammation has been linked to a great number of diseases and life-threatening conditions, such as heart disease and cancer.

Tuna is an excellent source of omega-3 fatty acids, also known as fish oil. This oil helps to fight inflammation and lower the risk of illnesses and diseases caused by it. In reality, one of the best ways fish oil helps to boost health is thanks to its powerful anti-inflammatory abilities.

A growing number of studies have already found that tuna consumption can ward off many autoimmune conditions, including lupus, Crohn’s disease, psoriasis, and rheumatoid arthritis.

Related: What Is Anti-Inflammatory Diet and How to Do It

2.Relieve the symptoms of depression

Sure, tuna doesn’t replace a medical care, but a moderate consumption of it is great for alleviating the symptoms of depression.

The recent study suggested that eating tuna fish is good for mental health and may ward off anxiety in women. Scientists believe it’s because of the healthy fats found in fish.

Antioxidants found in tuna help the body to get rid of harmful free radicals, protecting against chronic conditions and cell damage. A regular consumption of antioxidants is believed to ward off the development of diabetes, heart disease, certain autoimmune disorders, and even cancer.

Tuna fish is loaded with antioxidant-rich selenium and one can contains 190 percent of the recommended daily intake of selenium. Due to its antioxidant properties, selenium helps to lower the level of oxidative stress and stop the cell damage.

A research published in the World Journal of Biological Chemistry claims that tuna is a rich source of selenoneine, which is a selenium-containing compound that combats free radicals, prevents premature aging, and could even reduce the risk factor of chronic disease.

4.Canned tuna has an ideal selenium and mercury balance

One of the reasons why eating fresh fish, especially tuna, can be bad for health is because this type of fish contains a lot of mercury. Mercury has a harmful effect on the body and can even be a deadly poisonous.

Multiple studies have been conducted to reveal the level of mercury in fresh and canned fish. They have found that there’s a special form of selenium in canned tuna, selenoneine, which binds to mercury and reduces the dangerous effects of it.

The thing is, selenoneine bound to mercury acts as an antioxidant, significantly changing the mercury composition, making it less harmful.

In recent years, more and more people have begun to pay attention to the brain health since it’s vital for many body functions. The foods you eat daily can either ruin or benefit your brain health.

Tuna is plentiful in vitamins and minerals that have been linked to the brain health. High in niacin, tuna fish helps to lower the risk factor of age-related decline and Alzheimer’s disease.

Moreover, tuna is rich in omega-3 fatty acids that play a key role in increasing cognitive performance and protecting against mental health issues, including depression.

There are not so many ways to lower the risk of a kidney disease, but canned tuna can do the trick.

Due to the sodium and potassium content, canned tuna is highly balanced that helps to regulate the fluid balance of the body.

The kidneys function properly when the body keeps a correct fluid balance, thereby reducing the risk of developing kidney conditions.

The butterfly-shaped gland in the neck called thyroid plays a crucial role in controlling the metabolic rate, regulating the energy levels, and producing hormones.

Oily fish like tuna is a great source of selenium, a critical mineral that aids in supporting your thyroid gland health. Researchers suggest that the thyroid gland has the highest amounts of the mineral per gram of the tissue.

Related:   8 Health Benefits of Brussels Sprouts and How to Cook Them

That’s why it’s vital to supply the body with the right amount of selenium to ward off the conditions such as hypothyroidism, Graves’ disease, and autoimmune thyroiditis.

Being one of the richest sources of omega-3 fatty acids, tuna fish is considered as an effective way to prevent various eye disorders, including the age-related macular degeneration, which is the leading cause of blindness in people over 60 year old.

People with diabetic issues and complications are also prone to the blindness. Eating tuna at least once a week can help to lower the risk of developing a diabetic retinopathy.

9.Drop weight and keep it off

Low in calories and high in quality protein, tuna fish is an amazing addition to your weekly diet plan. In particular, due to its rich protein content, tuna can aid in curbing cravings, suppressing the appetite, and keeping you feeling full for longer.

A resent research published in the American Journal of Clinical Nutrition stated that consuming a high-protein food could lead to a significant reduction in the ghrelin levels, unlike the high-carb foods.

Ghrelin is a hormone that takes an active part in stimulating hunger. The research also claimed that the consuming tuna can regulate gastric emptying and increase satiety.

A study done by a group of researchers from the University of Washington School of Medicine showed that increasing a protein consumption by only 15 percent reduced a daily caloric intake by over 440 calories and led to a great reduction in the body fat mass and weight.

Rich in the anti-inflammatory omega-3s, tuna fish can help to lower high blood pressure. Tuna fish is also a wonderful source of potassium, which is a vasodilator and is highly effective in reducing the high blood pressure levels.

Regulating hypertension or just frequent blood pressure spikes can improve your well-being by easing the strain on the cardiovascular system. Maintaining healthy blood pressure is vital for preventing strokes and heart attacks, and a range of other conditions, including atherosclerosis.

11.Tuna is high in protein

Like mentioned above, tuna is plentiful in protein, which is essential to a majority of body functions. Protein makes up the foundation of the nails, skin, hair, and the muscles and is important for the synthesis of many hormones and enzymes.

Moreover, protein is used for the repair and growth of the body tissues. Protein deficiency has been proven to negatively affect the overall health, leading to numerous illnesses and diseases, including slow wound healing, impaired immunity, an increased appetite, and the low energy levels.

One can of tuna fish provides the body with 42 grams of protein so if you combine it with several other foods rich in protein, you will meet your daily requirement of the nutrient and thus maintain a proper health.

Related:   Is It Healthy to Eat Fish or Chicken Skin?

Consuming tuna fish can have a positive impact on your cardiovascular health. This oily fish contains the high amounts of omega-3 fatty acids and helps to lower omega-6 fatty acids along with bad cholesterol or LDL in the blood vessels and arteries, reducing the chances of developing coronary heart diseases. Plus, tuna replaces foods with a rich saturated fat content, warding off cardiovascular diseases.

Due to selenium and many other vitamins and minerals as well as powerful antioxidants, tuna fish can prevent certain types of cancer.

In particular, multiple researchers have shown that tuna can reduce the risk factor of kidney and breast cancers. Again, selenium found in tuna, which is a potent antioxidant, helps to neutralize the harmful free radicals, preventing them from causing a mutation in the healthy cells and turning them into the cancerous cells.

A number of other scientific researches have shown that tuna fish can alleviate colon cancer, mostly because of a rich content of omega-3 fatty acid.

Tuna has the rich B complex vitamins that have been linked to a great range of the health aspects.

Not only do B vitamins aid in increasing the efficiency of organs, speeding up your metabolism, protecting your skin, and raising your energy levels.

That’s one of the reasons why so many people eat canned tuna for lunch because it helps to beat an afternoon slump and replenish the body with energy and nutrients.

Besides healthy fats, tuna is a fabulous source of manganese, zinc, and vitamin C, which are all considered powerful antioxidants in nature and are one of the body’s defense mechanisms against the harmful free radicals.

The free radicals are the useless by-products of your cellular metabolism, which in large amounts can lead to many chronic diseases, including cancer.

But, of course, one of the best immune system-boosting properties of tuna is selenium. A single serving of canned tuna fish gives the body about 200% of the recommended daily intake of selenium. This makes tuna a potent antioxidant that helps to strengthen your immune system.

Here you have it! Some of the best reasons to incorporate tuna fish – better if it’s canned – into your weekly or at least monthly meal plan.

When choosing fresh tuna, be sure you stay away from bigeye tuna and bluefin tuna, which are dangerously high in mercury and can cause many health problems. Some people are allergic to tuna, so be sure to check for any allergic reactions by eating a small serving of tuna.