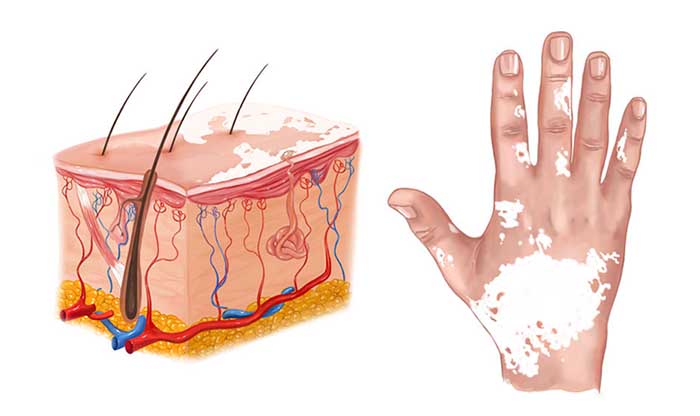 The condition where melanocytes – the cells that form the skin’s pigment – are destroyed is called vitiligo.

The white blotchy patches are the most obvious sign of vitiligo, albeit there are many other symptoms to watch out for.

Although vitiligo isn’t a widespread disease, it still affects at least 2 percent of the global population.

Vitiligo usually occurs on the hands, neck, and face, causing a traumatizing and drastic change in a person’s appearance. Vitiligo may affect the mucous membranes, such as the nose, mouth, retinas, and genitals. The patches may appear on the areas with hair growth, turning the hair in white or light gray color.

If you’re having white blotchy patches on any part of your body, chances are you’re suffering from vitiligo. Here are the types, causes, symptoms, and treatment (including natural remedies) for you to learn:

Vitiligo is a skin pigmentation disorder, which is characterized by ruining the cells that aids in providing the color of the eye area, hair, and skin. The result is typically white patchiness that resembles severe sunburn where the skin starts peeling. Vitiligo is photosensitive and isn’t infectious or contagious, but it may have genetic or hereditary markers.

In most cases, vitiligo affects the visible areas, such as the neck, face, elbows, hands, feet, and knees. However, it can occur on any area of the body. It’s difficult to know by how much the patches will spread and which area of the body the condition will affect.

It might take several weeks before you notice visible patches, but mostly the medium-sized patches stay stable for a few months or even years. The areas affected by vitiligo become more sensitive to the sunlight and other sources of warm light like tanning beds.

What are the types of vitiligo?

There are three scientifically proven types of vitiligo:

Each type of vitiligo has its symptoms and causes, but in general, they’re very similar and require a special care.

There are also a few other types of non-segmental vitiligo that tend to affect certain areas of the body. For instance, acrofacial vitiligo occurs on the toes and fingers, focal progresses in a discrete area, universal is characterized by the whole body depigmentation, and mucosal occurs mostly around the lips and mucous membranes.

What are the main causes of vitiligo?

According to the National Institute of Arthritis and Musculoskeletal and Skin Diseases (NIAMS), there are no exact causes of this skin disorder.

Scientists have conducted multiple researches and have come up to the conclusion that vitiligo might be a rapid autoimmune response where the body begins to attack itself. When this response happens, the body gradually ruins its own melanocytes, losing the pigment on the affected area.

Other researchers believe that vitiligo is an inherited condition. The studies found that more than 30 percent of children and adults who suffer from vitiligo have at least one family member who had or has this skin disorder.

There are some other factors that may contribute to vitiligo. To sum up, here are the causes of this skin disorder:

Vitiligo can happen at any age, albeit scientists suppose that 20 somethings are more likely to experience this disorder. The condition affects both sexes equally and all races, but it’s more visible in people with a darker skin type. Since the disease isn’t contagious, you can’t catch it from a friend, a child, or a relative who has any type of vitiligo.

What are the most common symptoms of vitiligo?

The appearance of the flat white patches or spots on the skin is the main symptom of any type of vitiligo. The area of the body that is exposed to the sun more often than others is usually the first one to experience a white spot.

Vitiligo begins with a simple, lightly noticeable spot, which appears to be a bit paler than the surrounding area of the skin. If not treated, over time this spot gets paler and eventually turns white. The white patches have an irregular shape and the edges might get a bit inflamed with a lightly red tone, often resulting in itchiness.

Even though vitiligo doesn’t typically cause any pain, discomfort, soreness, irritation, and dryness, it’s still important to start treating the condition early. Otherwise, the complications can occur.

The progress of vitiligo can vary from person to person. While some people may experience just a couple of white spots that don’t progress, others can have the huge white patches that attach one to another, affecting the bigger areas of the skin.

What are the possible complications of vitiligo?

Vitiligo doesn’t trigger any other disease, however people who have this disorder have a higher risk to experience:

People with vitiligo have also an increased risk of developing another autoimmune disorder, including Addison’s disease, thyroid problems, Hashimoto’s thyroiditis, pernicious anemia, or type 1 diabetes. There’s no scientifically proven reason why this happens, but many researchers suggest it’s because of a weakened immune system.

How is vitiligo diagnosed?

A health care provider will check your medical history, ask about your family members who had or have vitiligo, and test a skin sample to set a diagnosis. They may also ask for reports of blistering or sunburns, if you remember any. According to the National Institute of Arthritis and Musculoskeletal and Skin Diseases, sun damage causes vitiligo in some people. You may also need to do a skin biopsy test that will help to reveal the presence or absence of the pigment. The skin biopsy is usually the most effective way to the right diagnosis of the skin disorders, including vitiligo.

You may also need to do blood tests to find out your thyroid function and vitamin B12 levels. The deficiency of this vitamin or an overactive thyroid is often linked to vitiligo. Based on the tests and skin examination, your doctor creates a special treatment program for you.

How is vitiligo treated?

Since vitiligo is benign and painless, there’s no need in taking painkillers or harsh antibiotics. The treatment is usually all about restoring a pigment to the skin, mostly using cosmetic methods. Vitiligo treatment takes a long time to cure and you may not see any positive results for weeks or months.  The most common ways to treat vitiligo are:

The ultraviolet light therapy is often used to restore the pigment in those with vitiligo. It involves taking psoralen, a medication that makes the skin become more sensitive to the light therapy. The medication is available in oral and topical forms and has little side effects. The combo of UVA rays and psoralen is a part of the PUVA treatment that aids in darkening the light parts of the skin.

When taking psoralen, make sure you use sunscreen to protect the rest areas of your body, because your skin becomes more sensitive to UVA rays. Your doctor can prescribe several PUVA treatments per week.

If repigmentation doesn’t work, depigmentation of the rest skin areas of the body can be required. Depigmentation isn’t recommended for people with just a few white patches. It’s ideal for those with the more complicated vitiligo symptoms on more than half of the body. This treatment helps to match the areas affected by vitiligo to the normal pigmented skin.

Monobenzone is usually prescribed for patients undergoing depigmentation. The medication is topical and applied to the skin to brighten the pigmented areas. Since medication monobenzone has a strong ability of bleaching the skin, even of those who simply touch you, you must avoid a skin-to-skin contact for 2 to 3 hours after the therapy.

Sunless tanners and makeup are considered as noninvasive ways to manage vitiligo. Tanning doesn’t aid in restoring the pigment loss, though. It simply makes the difference between depigmented and normal skin tone more noticeable. Using sunscreen with UVB and UVA protection is a must.

Immunomodulators can help to treat some vitiligo symptoms as well. Immunomodulators are ointments with an active ingredient called pimecrolimus or tacrolimus. People with little parts of the pigment loss on the neck or face benefit from using immunomodulators.

When it comes to treating vitiligo, topical medications are considered the most effective ones in repigmenting those white patches.

But not all topical treatments work for everyone, especially kids. Steroid topical medications are good for managing vitiligo in adults and children alike.

Before you see any positive results though, you should use steroids daily for 2 to 3 months. Be careful with steroid creams and don’t use any without consulting a doctor first. Those creams are known for their adverse effects, such as streaks of the color on the skin or a thinning of the skin.

Surgery is considered in severe cases only after a few years of intense treatment, where it’s vital to restore the healthy skin tone.

The surgery involves placing healthy skin in the areas affected by vitiligo. It’s costly and can lead to scars.

Are there any natural treatments?

There are truly a lot of ways to treat vitiligo in a natural way, but it doesn’t mean that you can skip the doctor’s examination. Before using any of these methods, it’s important to talk to a health care provider first.

One of the best natural treatments that’s widely used to treat vitiligo is skin needling.

Many patients turn to needling when other therapies fail. Needling aids in the repigmentation of the areas of the skin affected by vitiligo. Plus, it stimulates the collagen production and reduces scars and stretches. The drawback is a high risk of infection.

Aloe vera has been used for decades to treat different skin conditions, including vitiligo.

It maintains a healthy immune system response and is loaded with essential vitamins and antioxidants including vitamins A, B12, C, and folic acid, which all help to combat vitiligo symptoms.

Calcium, copper, zinc, chromium, and other minerals found in aloe vera may help to boost repigmentation of the skin. Aloe vera is used topically, but make sure you’re not allergic to it. You can also blend cucumber, aloe vera, and unsweetened yogurt for a healing smoothie.

Vitiligo is linked to mental health disorders more often than to the physical ones. People with vitiligo are prone to withdrawal from social circles, anxiety, and depression. That’s why, besides different therapies, it’s crucial to maintain healthy mental health.

Apraxia of Speech – Everything You Need to Know
Fibroids: Types, Causes, Symptoms, and Treatments